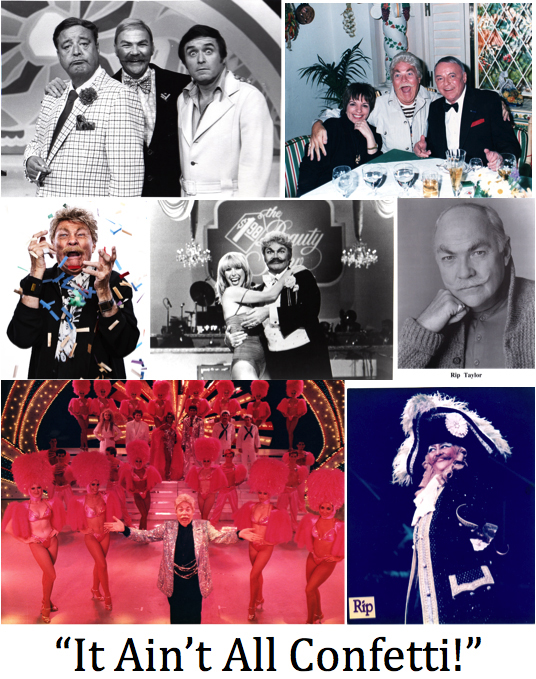 HOLLYWOOD —Rip Taylor is one of television’s most instantly recognizable celebrities. A guest star with over 2,000 television appearances under his belt, Rip brought his wild energy to “The Gong Show,” “Password,” “The Merv Griffin Show,” “The Mike Douglas Show,” “The Tonight Show,” “Late Night with David Letterman” and to the coveted center square on “Hollywood Squares.” Perhaps Rip’s greatest impact in television was when he was picked by Chuck Barris to host “The $1.98 Beauty Show.” The campy ”˜beauty and talent contest’ brought Rip icon status as he served as ringmaster, gloriously reveling in the glitter and kitsch of “The World’s Tackiest TV Show.” For decades, Rip has maintained his status as one of the top headliners in Las Vegas. He has been named Entertainer of the Year three times in a row, spent a year headlining The Flamingo Hotel’s “Rockettes Extravaganza,” and in 2002 brought “Rip Taylor’s Christmas Spectacular” to the Rio. Additionally, Rip has played on Broadway and toured the country as the lead role in plays such as “Sugar Babies,” “Anything Goes,” “Oliver,” “Peter Pan,” and “A Funny Thing Happened on the Way to the Forum.” In addition to comedy and music, Rip is an accomplished legitimate actor. He played Demi Moore’s surly boss in “Indecent Proposal,” and plays Kate Hudson’s father in the 2003 Rob Reiner film, “Alex and Emma.” Rip Taylor feels fortunate to have become a madcap mainstay in show business. He frequently donates his time and talents to numerous charitable causes including The Thalians, The Screen Actors Guild, The Actors Home, The Friars Charitable Trust and many, many more.

El Portal Theatre is a historic landmark in the San Fernando Valley located in the heart of North Hollywood just minutes from Universal Studios, Warner Brothers, Disney, ABC, CBS-Radford, NBC Burbank and sits across from the Academy of Television Arts and Sciences and the Art Institute. Since its opening in 1926 — first for vaudeville, then silent movies, and then Academy Award-winning films. Chosen by the Smithsonian Institute as the venue for induction ceremonies to announce their first permanent Entertainment History Exhibit, in the past 10 years celebrities have starred in productions and musical reviews including Debbie Reynolds, Bea Arthur, Kitty Carlisle Hart, Charles Nelson Reilly, Ed Begley, Jr., Hal Linden, Carol Lawrence, Fred Savage, David Faustino, Sally Struthers, Charlotte Rae, Marnie Nixon, Maripat Donovan, JoAnne Worley, Vicki Lewis, Kathleen Chalfant, Carol Channing, The Manhattan Transfer, to name only a few and now the El Portal is thrilled to offer Rip Taylor.

WHAT/WHO: Comedy Legend of Stage and Screen, Rip Taylor (RipTaylor.com), is scheduled to introduce “It Ain’t All Confetti” at the El Portal Theatre (elportaltheatre.com/elportal.html). Rip is one of television’s most recognizable personalities and “It Ain’t All Confetti” puts a humorous and revealing spotlight on a career that has spanned five remarkable decades.