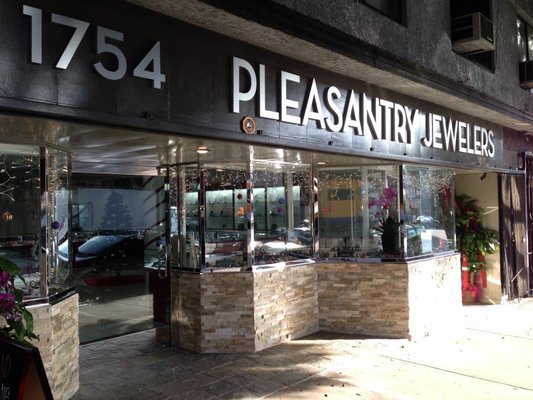 LOS FELIZ—On Saturday, November 2 at 1:37 p.m., a thief made off with earrings worth $46k from Pleasantry Jewelers. According to the owner and manager, the rouse to steal from the jewelry store began on Friday, November 1.

Canyon News spoke to Kathy, the manager of Pleasantry Jewelers about the incident. Late Friday afternoon, at 4:12pm, Kathy indicated the jewelers received a call from an unknown number asking for diamond earrings. The man on the phone was very specific on the detail of what he wanted, because he wanted to surprise his movie star wife, which seemed like the norm for the Los Feliz region.

When setting up an appointment to see the earrings the following day, the caller was reluctant to give his identity before telling the establishment his name was “Al,” and saying he would come by around 11:30 a.m. on Saturday.

The day of the incident, Kathy said an unknown number with a 310 area code called wanting to meet with the owner, James Ta, to sell estate jewelry to him. Ten minutes later, the same number called again, with the man indicating that he couldn’t make it to the store. He suggested they meet somewhere else, when asked for his name, the caller did not want to give his identity either; Ta declined to meet him because of his suspicious behavior.

The same number eventually called back giving his name, William Burker, and an alternative location. When Ta left the store to meet the gentleman, the suspect who identified himself as “Al” showed up at around 12:58 p.m. asking to see the jewelry. As Kathy showed him the ledger containing the diamonds, “Al” ran off with the earrings. The store believes the suspect, who used the alias, Al, and William Burker worked together to distract Mr. Ta in order rob the establishment.

At 10:16 a.m. on Sunday, November 3, Pleasantry Jewelers received a call from someone claiming to recognize the suspect, Al, from the news segment released on KABC 7 news, but wished to remain anonymous. An investigation of the robbery is still being conducted by the Los Angeles Police Department.