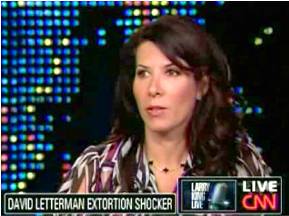 BEVERLY HILLS—Famed attorney Robin Sax, who is a local resident, admits to being interested in the law as a young girl as a way to have a big mouth. That being said, Sax is often on CNN and HLN discussing some of the biggest cases in America on both “Nancy Grace” and Jane Velez-Mitchell’s “Issues.” Sax speaks candidly about a case she’s now involved in, and she also gives sage advice to parents about how to have those very important discussions with their kids in order to keep them safe. Just before the beautiful mother took off to Disneyland, my friend Robin sat down for this exclusive interview.

Q-You are representing a young lady (Samantha Spiegel) who is allegedly being stalked by John Mark Karr, who became well known as the man who falsely admitted to raping and murdering JonBenet Ramsey. What is your client’s background with him?

A-Samantha Spiegel met John Mark Karr when she was 9 years old and was a student at the school where he was a teachers-aide back in 2000. Several years later, like so many other people in 2006, Samantha was following his notoriety on the news. Samantha was 17 when she reached out to Karr via e-mail. She was concerned/curious as to what really happened. Samantha did some research and decided to reach out to him. She successfully connected with him via e-mail and that is how they struck up a relationship. That was two years ago.”

Q-Robin, you are a tireless advocate for victims of sexual crimes. We have many of the same circle of friends and everyone speaks frankly about you being very sincere. What made you get involved with the law and specifically with victims and survivors of sex crimes?

A-“Tommy, I went to law school because I knew I wanted to be in a profession where I could use my ”˜big mouth.’ In other words, I have something to say and I wanted to be able to be a strong advocate. When I left law school there was no doubt that I wanted to be a prosecutor. Unlike being a defense attorney where you have to perhaps put your ethical or personal feelings aside sometimes, I felt as a prosecutor I could always do the right thing every time for every case. I never thought I would be in sex crimes or child sexual assault expert though. Like most DAs I thought I would do gang crimes. In order to learn about gangs violence victims I volunteered to do domestic violence cases to learn about recanting victims (or victims who are not cooperative with the process). As I started prosecuting domestic violence cases I realized that these people cannot protect themselves and cannot speak for themselves. I realized it would be my job to protect them. In the end I was never assigned to gang unit – I was assigned to the child sexual assault unit and that became my passion for over a decade. Now I am a national spokesperson and victims advocate. It is tremendously rewarding and my life’s work.”

Q-How are you able to calm many of your clients down enough to trust the system? Being a stalking survivor myself, I found the system daunting to deal with. Your clients always speak well of you, do you have a psychology background as well?

A-“Some people are more adverse to ”˜the system’ than others —that is definitely a difficult part of my job. A lot of the time my clients have been so mislead thus far that they are tremendously relieved to have someone who responds to them. That is one of the biggest surprises in my work: how many people have gone so long without justice. At this point I am indeed doing what the system should provide on its own. In other words, I advocate for my clients who are usually victims who have not had justice. The agencies that are responsible in the state government aren’t really doing their full job in these cases. It was different when I was in the DA’s office. The victims were just entering the system and indeed there were times when ”˜calming them down’ was a necessary part of moving forward with prosecution. But now, with most of my clients, there is just a sense of relief that they have a strong spokesperson and advocate on their side (in me). Part of being a prosecutor is being part lawyer, part advocate, and part shrink. When you work in the world of sexual assault you are usually working in multidisciplinary teams with social workers, police, prosecutors, etc”¦ so you can’t help but gain those skills along the way. I had the privilege of working with some of the best multidisciplinary units when I was a prosecutor in Los Angeles. I think this type of approach should be utilized throughout the state and country.”

Q-What has been the biggest challenge for you in your career and your quest for justice for crime victims?

A-“The biggest challenge so far in my career has been being a witness to ”˜missed opportunities’ in the system and realizing that these missed opportunities have led to unnecessary major crimes and murders. I have seen first hand cases where there were these clear missed opportunities, a term used to define cases where law enforcement, prosecutors, parole, the judicial system, and the criminal justice system as a whole failed society and individual victims. The biggest frustration and biggest challenge
is that this system (the criminal justice system) requires many parts to work at the same time. It’s hugely frustrating when one piece breaks down and sacrifices justice/safety for a victim (that is, it could be any one of the many parts of the case: a Judge, prosecutor, defense attorney, cop/police, jury member, state law enforcement official, etc.)”

“I will give you two examples (out of many) of major recent missed opportunities: in the case of John Gardner (I am the attorney for Amber Dubois parents) – he is the man who murdered both Chelsea King and Amber Dubois – the prosecutor on his first rape conviction could have demanded more jail time. His parole officer could have cited him for violating parole stipulations. The system clearly could have prevented Gardner from being free to kill Chelsea and Amber because he was in their system before he was released to commit these horrible murders. Similarly (but unrelated) parole issues occurred in the case of Philip Garrido (who kidnapped and kept Jaycee Duggard for 18 years). You can read more about his case and other missed opportunities on these links authored by me.”

Q-What can people do, what is your advice if they want to help change the system and make sure predators are kept behind bars and away from all of us?

A-“My advice is to not be silent. We all must together demand that changes are made to the system to ensure justice for victims of crime. Speak out any way you know how: read articles, write Op-Eds and opinions, talk to each other, and most importantly – learn safety tips and teach them to your family and children. The best way to prevent a crime against yourself, your child or loved ones is to learn the best practices in safety. Have that safety talk with your kids and family that you have been dreading. The key to keeping safety talks from being scary is for parents to assume and proceed as if body/personal safety discussions are not scary. Just because we as adults have myriad of worries we need not convey our fears to our children. However, there are things kids must know before they dive into the world of independent adults. Just start the discussion! It’s never too early to begin to give children or family members information that can help them stay safe. Treat personal safety like any other parenting lesson – find appropriate times, don’t tackle too much at a time, and consider the child’s personal development and understanding. And above all, do not use fear or scare tactics to educate children. As trite and overused as the expression seems – knowledge truly is power.”

Readers can learn more about Robin Sax’s advice on how to protect yourself and your family by reading Robin’s book “Predators and Child Molesters: A Sex Crimes D.A. Answers 100 Of The Most Asked Questions”