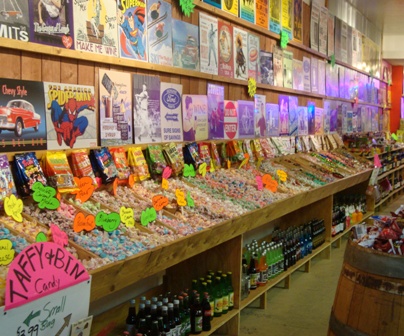 In a conversation with Canyon News, Co-Owners Dustin Ellis and Rusty Hadjilou explained they held a soft opening for Rocket Fizz in late December. The grand opening allowed the community to get acquainted with the store while participating in face painting and sampling of soda pop and taffy selections.

“My wife and I do a lot of walking around the area and we felt like something was missing. When I walked into a Rocket Fizz one day, I said this is it,” said Ellis, a Sherman Oaks resident.

The vintage style of the shop also seems to attract passer-by, with a soldier mannequin welcoming customers in the entrance and classic band and tin antique signs across the walls reminiscent of the generations gone by.

“The vibe is incredible from the minute you walk in. They have a really hard-to-find selection of obscure candy and sodas,” said Jose Morales, a customer who took home a free bottle of Jelly Belly soda for making a purchase of $10 or more.

The Sherman Oaks location will mark the ninth store in California, not including three out-of-state locations. It is also an independently owned and operated location, according to the Rocket Fizz webpage, unlike the Camarillo, Westlake Village and Pasadena stores owned by the original Rocket Fizz co-founders.

Future locations for Rocket Fizz are Santa Monica, Malibu, Westwood and Woodland Hills among others.