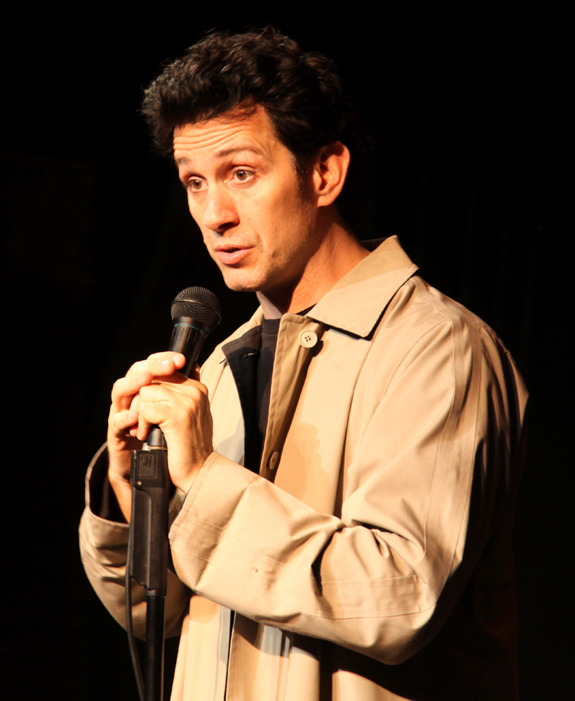 HOLLYWOOD —Ronnie Marmo tells Canyon News, “Lenny is back, and boy is he pissed!” Actor Ronnie Marmo, who stars on ABC’s “General Hospital,” brings the undisputed comic legend Lenny Bruce back to life in the one-man show “Lenny Bruce is Back (and Boy is He Pissed).” Directed by eight-time Daytime Emmy AwardÂ® winner Bob Guza, who is head writer for “General Hospital” and written by Sam Bobrick & Julie Stein.

Obscene? Provocative. Criminal? Controversial. Addict? Advocate. Comic? This is Lenny Bruce. Now back from the grave and obscenely funny, the show takes a rare and inspirational journey with the ultimate hipster and defender of free speech. Considered one of the greatest artists of the 20th century, Lenny fought for free speech by inciting social and politically profane expression through thought-provoking humor. His life and work impacted poetry, politics, music, film and, of course, comedy, and was marked by great passion and great pain. His unwavering commitment to free speech led to numerous obscenity charges and arrests. He was a martyr for today’s comedy and his “forbidden humor” paved the way for such comic greats as Richard Pryor, George Carlin and Robin Williams. Bruce has not yet been surpassed at his particular brand of art, and chances are, if he was still around, he would be in as much trouble today as he was when he was alive.

On screen, Marmo is currently a regular on the ABC hit daytime drama “General Hospital” in the role of Ronnie Dimestico and stars in the Independent films “Limbo Lounge,” “Pizza With Bullets,” and opposite Brian Austin Green in “Stage 4,” all of which are gaining momentum on the 2010 festival circuit. Previously, Marmo guest starred in the hit CBS series “JAG,” and “The Young and The Restless,” and garnered notoriety for the role of Moof in the MGM feature, “Deuces Wild.” Marmo is not afraid to create his own projects either, including the semi-autobiographical story, “West of Brooklyn,” released in 2009, which he wrote, produced and starred in. Marmo has strong roots in theatre, performing for almost two years with the Broadway National Touring Company as Tony in “Tony N Tina’s Wedding.” And in 2001, Marmo started the 68 Cent Crew Theatre Company and went on to open his own 99-seat theatre in Hollywood, which he aptly named Theatre 68. Marmo has since produced more than 50, directed more than 15, and starred in more than 30 plays, as well as having written several scripts, both for the stage and the screen. Marmo is the recipient of the 2010 Robert Pastorelli Rising Star Award at the 8th Annual Garden State Film Festival and he also won the 1997 Cable ACE award and was nominated for a second award as host and producer of the Documentary of the Year for his work with Comcast Cable.

Lenny Bruce is Back (and Boy is He Pissed)!