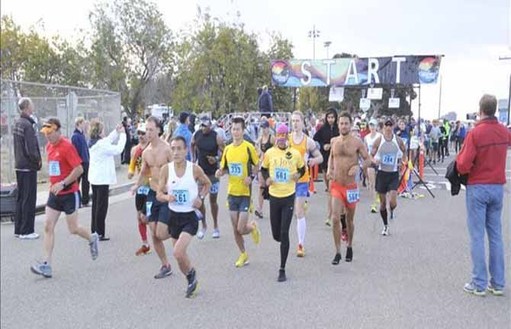 MALIBU—Runners from around the world joined together at the Malibu International Marathon on Sunday, November 10.

An Expo event took place the Friday prior to the marathon from 11 a.m. to 5 p.m. in order to welcome the runners into town. While Saturday, various events were organized at Zuma Beach such as a Kids Race, a panel with Josh Cox Race on strategy, a free paddle board demo, food trucks and other children’s activities.

The marathon began at the Camarillo airport at 7:30 a.m. for full-marathon runners and ended at Zuma Beach while those pursuing the half-marathon began at Point Mugu State Park at 7:30 a.m. The SUPathon extended seven miles north along Pacific Coast Highway and was followed by a six-mile stand-up paddle at Leo Carillo State Beach. Participants were given a six and a half hour time limit, while those who ran the half-marathon or the SUPathon had a five hour time limit.

Tired runners enjoyed a variety of refreshments including fruit, water and a local food truck fare. In addition, the Los Angeles based punk rock band Core performed for participants which was their second time attending the Malibu Marathon.

“Huge thank you to all the volunteers that came out to support the athletes at the Malibu Marathon,” wrote the Malibu marathon on their Facebook page. “Thank you for handing out water along the course, mixing up batch after batch of Accelerade, handing out medals at the finish line, organizing gear pick up, and cheering on athletes along the course. We are inspired by you!”

Both female and male winners received $500 for first place, $250 for second place, and $100 for third place along with plaques for their achievement.