“Now I’m sure that you all know by now that I don’t like talking about myself, and I don’t like making things about me. Other than the usual satirical, parodic, joking way. I like this show to be about you and the things that matter to all of us. The one thing that I know that has happened over the 31 plus years of this program is that there has been an incredible bond that has developed between all of you and me,” said Limbaugh.

He spoke about his viewers from the past 25-30 years. 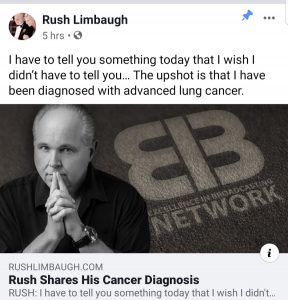 “I can’t help but feel I’m letting everybody down with this, and I thought about not telling anybody. But the upshot is that I have been diagnosed with advanced lung cancer, diagnosis confirmed by two medical institutions back on January 20th,” said Limbaugh.

He ended by saying:

“You’ve been one of the greatest sources of confidence that I’ve had in my life so, I hope I will be talking about this as little as necessary in the coming days. But we’ve got a great bunch of doctors, a great team assembled. We’re at full-speed ahead on this, and it’s just now a matter of implementing what we are gonna be told later this week. So, I’ll be back here. I’ll be back Thursday. If not, it will be as soon as I can – and I know that every day I’m not here, I’ll be thinking about you, and missing you. Thank you very much.”

Vice President Mike Pence and President Trump posted statements on social media showing support to Limbaugh and his family after his announcement.

“Many people do not know what a great guy and fantastic political talent the great Rush Limbaugh is.  There is nobody like him.  Looking for a speedy recovery for our friend,” said President Trump.