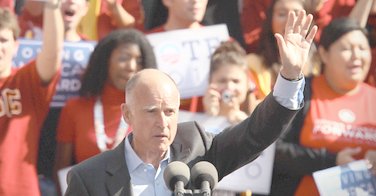 SANTA MONCIA—The city of Santa Monica issued a press release expressing concern over California Governor Jerry Brown’s newly released balanced budget plan, which includes plans to cut $12.5 billion in state spending, warning that the intended elimination of redevelopment agencies could have a severe negative impact on the city. The release states that over the past 10 years, the Santa Monica Redevelopment Agency has invested close to $300 million in the community.

Plans over the next five years that would be affected by the elimination of redevelopment include improvements to Santa Monica High School’s recreational facilities; the construction of the Pico Neighborhood Library; improvements to the Exposition Light Rail, which is set to come to the city; and over 300 residences that would not be built or receive needed improvements.

Brown has issued a statement on his website regarding the controversial nature of the cuts.

“These cuts will be painful, requiring sacrifice from every sector of the state, but we have no choice. For 10 years, we’ve had budget gimmicks and tricks that pushed us deep into debt. We must now return California to fiscal responsibility and get our state on the road to economic recovery and job growth,” said Brown.

“While the need to take dramatic action to address state budget difficulties is understandable, eliminating redevelopment agencies is counterproductive. At a time when California is desperately in need of job creation and affordable, sustainable and community-oriented development, redevelopment is essential,” said Mayor Bloom.

Santa Monica Director of Housing and Economic Development, Andy Agle, gave the most critical remarks regarding the budget decision in the release, pointing out that the recently passed Proposition 22 was intended precisely to keep funds within local governments.

“Californians are fed up with the State of California’s budgetary games and maneuvers, and the proposed elimination of redevelopment is another attempt to circumvent the letter of the state constitution while violating its spirit and voter mandates,” said Agle.