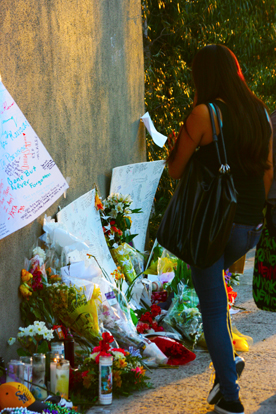 SANTA MONICA—The abrupt and shocking suicide of Santa Monica High School student has left a community in mourning and looking for answers, some of which may never be known. Matthew Mezza, 14, was by all accounts a happy, well-liked and untroubled young man.

Mezza was with his Santa Monica High School baseball teammates on Friday, January 14, at around 5 p.m. when he suddenly ran from the practice field and announced that he was going to jump off a building. A handful of his teammates pursued, but Mezza soon vanished. After ascending to the 10th floor of the nearby Sheraton-Delfina Hotel and smashing a ballroom window, Mezza jumped to the ground below as onlookers watched in horror. He was taken to a nearby hospital, where he later died.

Although all indications point to a suicide, an autopsy must be conducted before making an official determination, according to Santa Monica Police Sgt. Jay Trisler. The Santa Monica-Malibu Unified School District has said that it is conducting its own investigation as well.

Mezza was described by his grandparents as a “perfect child,” with a good relationship with his mother. He was also an accomplished student and athlete.

Neil Comess-Daniels, rabbi at Beth Shir Shalom, was en route to the hospital when Mezza died. Mezza also attended Beth Shir Shalom since childhood; he was a youth leader.

Comess-Daniels has said that the family was in an inconsolable state upon hearing about his passing.

A sidewalk tribute adorned with flowers and signs in memory of his loss has been erected across from Santa Monica High at the Pico Boulevard entrance. Facebook pages have also been created in his memory.

“I will always remember Matthew for his flamboyant attitude to life. I miss him so much,” read one Facebook comment.

Santa Monica High School had grief counselors on hand on Tuesday for students, especially Mezza’s teammates. The baseball program has announced it has dedicated the season to Mezza.

A funeral service was held on Wednesday, January 19, at 3 p.m. at Hillside Memorial Park.

“The tragic death of student Matthew Mezza has shaken the SMMUSD community,” read a statement released by the Santa Monica-Malibu Unified School District. “The SMMUSD community’s thoughts and prayers are with Matthew’s family.”