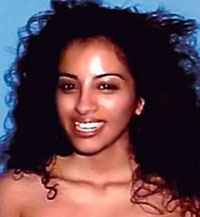 SANTA MONICA—Adel Tabrizi Chapel, 25, of Santa Monica, was sentenced to 56 years to life in prison for the murder of his girlfriend, Denise Figueroa, on Thursday, December 2.

The verdict was handed down by Van Nuys Superior Court Judge Martin Herscovitz, who also denied the defense’s request for a new trial.

Chapel was convicted of first-degree murder by a Van Nuys jury on November 15 of this year. The jury also found Chapel guilty of using a hammer to commit the murder. The verdict was reached after three hours of deliberation, according to the prosecutor in the case, Deputy District Attorney Jane Creighton.

The body of North Hills resident Denise Figueroa, 22, was found in the trunk of a black Nissan Altima in Valley Village in March of 2009. She had been reported missing on February 28 by her mother. Authorities say that she was struck at least nine times in the head and had wounds on her arms from defensive action against the attacks.

Police found Figueroa’s body using information provided by KTLA-TV, which received an anonymous tip detailing the crime and her body’s approximate location. The note was later revealed to be from Chapel’s brother, who testified in the trial.