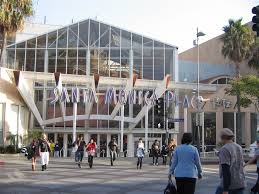 SANTA MONICA—Santa Monica Place, the mall at the end of the famous Third Street Promenade, is set to re-open on August 6. For many locals, that day can’t come soon enough. The re-construction of the mall has been a massive project, and the large construction crews required to complete the job have further congested the already crowded downtown Santa Monica area.

Lack of parking has been one of the biggest complaints. The previous mall closed in January of 2008, and construction began in April of that year. Since then, construction workers have been competing for parking spaces in the limited city-operated decks in downtown Santa Monica. To make matters worse, Parking Structure 7, one of the decks adjacent to the mall, closed down for renovations and won’t re-open until the mall opens next month.

The construction project has involved the transformation of the once indoor mall into a three-story, open-air shopping plaza with a rooftop dining area, overlooking the Pacific Ocean and Santa Monica Beach. Over 70 specialty retailers, department stores and restaurants will call the new Santa Monica Place their home.

Mall owner, Macerich Co., developed two sets of plans for the re-design of the mall, which got rejected by the community before revealing its third and final plan, which was approved in 2007. Macerich hopes that the use of recycled materials during construction and the installation of solar panels will help qualify the building for LEED certification. The Leadership in Energy and Environmental Design certification is awarded by the U.S. Green Building Council to buildings that meet very high environmental standards.