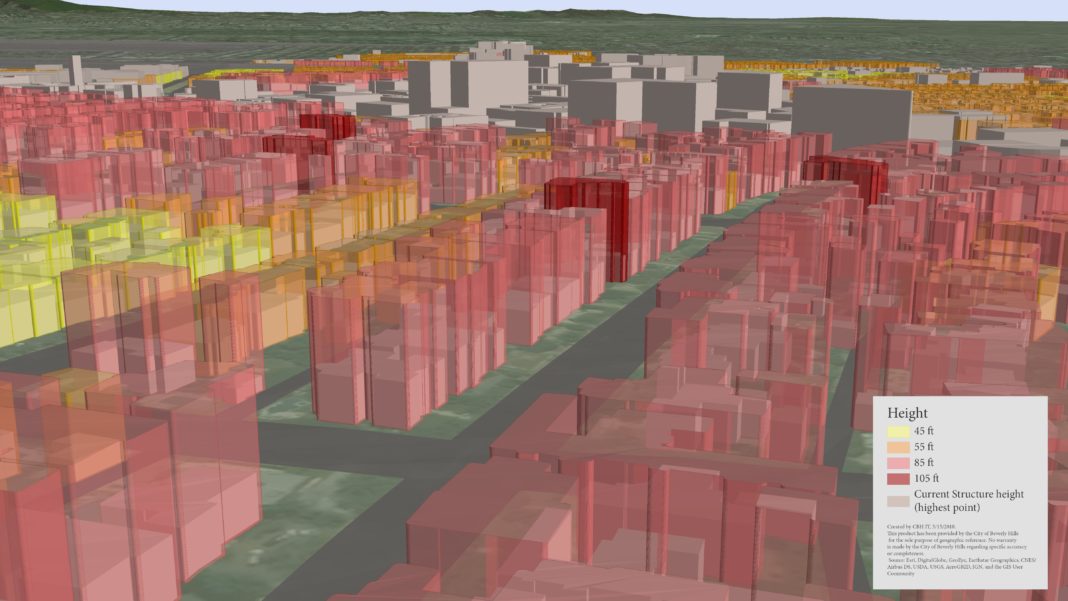 BEVERLY HILLS—The city of Beverly Hills recently passed a resolution against State Senator Scott Wiener’s proposed SB-827 bill in January 2018 which would allow unregulated construction in what is noted as “Transit Rich Areas,” that have high densities and heights that surpass the city’s General Plan and building codes. Senate Bill 827 would override local control on housing development that is within ½ mile of a major transit stop or ¼ mile from a high-quality transit corridor as defined by the legislation.

Therese Kosterman, Public Information Manager for the city of Beverly Hills indicated to Canyon News that Beverly Hills strongly opposes SB-827. The city’s goal is to maintain its current housing stock in addition to maintaining its residents and long-term tenants in the region, who would have to leave if rents rose in the market.

Beverly Hills’ major arteries and the two future Purple Line stations in Beverly Hills qualify as transit hubs; a half-mile radius around these areas includes most of the city’s residential housing stock. If those buildings were replaced, the new buildings, including apartments built since 1995 in the state of California would not be subject to rent control, and could lead to a result in higher rents in the region.

SB-827 only requires a 10-15 percent affordable housing requirement. This new housing would be built without any oversight from the city of Beverly Hills on height or density and could lead to gentrification of the city’s stable housing stock. The result would be a spike in average rents in Beverly Hills and a net loss of affordable units.

“Beverly Hills is committed to providing housing for all income levels,” said Mayor Julian Gold. “Our rent stabilization ordinance and protections for tenants are among the strongest in the region. Instead of requiring a “one size fits all” approach, the state should give cities resources to deal with the affordable housing crisis that make sense for their communities.”

“Yet again, Sacramento politicians are dictating how we should live in Southern California,” said Vice Mayor John Mirisch. “This bill would destroy the City’s character, drive out longtime residents and prevent the City from controlling rent increases and protecting tenants. Each community in California has its own unique DNA and it is this diversity that makes our dynamic state special. The bill’s Soviet-style master planning is the worst possible response to a serious housing problem in California.”

Cities including Los Angeles, Santa Monica, Culver City and West Hollywood are also in opposition to the new bill. The League of California Cities, which represents a majority of the cities in California, is also against the bill.

Residents can let Senator Benjamin Allen, who represents Beverly Hills in the state senate and is a member of the Senate Transportation and Housing Committee their thoughts on the bill. More details regarding a state constitutional amendment are currently being drafted, that would maintain local control over development and community character.

According to a press release from the city of Beverly Hills, over 60 percent of residents in Beverly Hills are renters and, with their support, the Beverly Hills City Council passed a strong rent stabilization ordinance that caps annual rent increases and imposes other protections for tenants including relocation fees in the event of no-cause evictions. Average rents are lower in the city of Beverly Hills than other nearby communities, including Santa Monica and Culver City because of a longtime, stable housing stock that could disappear if SB 827 is passed. To obtain more details visit www.beverlyhills.org/sb827.  To read the bill in full visit http://leginfo.legislature.ca.gov/faces/billNavClient.xhtml?bill_id=201720180SB827.