UNITED STATES−On Thursday, March 19, the U.S. House Permanent Select Committee on Intelligence and Chairman of the House Intelligence Committee, Representative Adam Schiff requested dismissal of a lawsuit against him about the phone records of President Trump’s personal attorney, Rudy Guiliani during the impeachment probe. 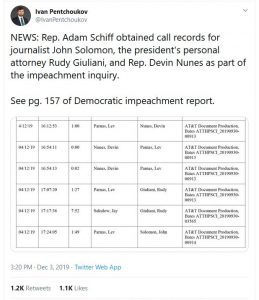 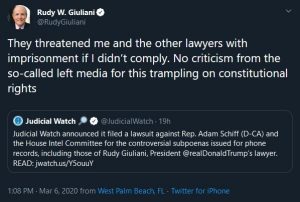 Judicial Watch reported  they filed a lawsuit and the public’s common-law right of public access to examine government records after receiving no response on December 6, 2019 requesting the information.

“All subpoenas issued by the House Permanent Select Committee on Intelligence on or about September 30, 2019, to any telecommunications provider including, but not limited to AT&T, Inc., for all records of telephone calls of any individuals. All responses received to the above subpoenas,” states Judicial Watch on its website.

“Adam Schiff spied on Americans by subpoenaing the phone records and then made them public,” said Fitton in an interview with OAN. Fitton indicated that Schiff was attempting to keep these records secret.

Schiff’s fellow Congressman Andy Biggs  publicly addressed Schiff throughout the impeachment inquiry, asking for his colleague to be censured in September 2019. Representative Matt Gaetz and Representative Jim Jordan argued with Schiff about  the credibility of the alleged whistleblower in the case.

Schiff is  claiming immunity from the lawsuit, as Judicial Watch requests for the Congressman who represents the 28th District in California to be held accountable for his actions.