Questioning were posed about Yovanovitch being relieved of her duties by President Donald Trump. Members of Congress thanked Yovanovitch for her 33 years of service. She was dismissed when her administration was not re-elected. She indicated her dismissal was unexpected and led to undue emotional hardship, when questioned by Democratic Counsel Daniel Goldman. 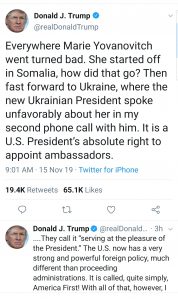 President Trump defended his decision on Twitter indicating he has the right to choose his ambassadors. Some argued the President’s tweet was tampering with a witness, while others indicated it was part of a smear campaign against the ambassador.

During the question, Devin Nunes attempted to yield some of his time to Rep. Elise Stefanik to question Yovanovitch, but Chairman Schiff would not allow Rep. Stefanik to speak, stating “Gentlewomen, will suspend.” Schiff indicated that they were not allowed to yield their time, a point which Nunes and Stefanik argued.

“What is the interruption this time?” Stefanik asked. “It’s our time,” she continued.

Chairman Schiff called on Counsel Castor to speak, and Nunes conceded his time to Castor. Stefanik took the Republican’s time allotment she argued she was denied earlier to read what each Republican member had been denied to say. She attempted to give Rep. Jim Jordan the last four minutes of time.

“Jordan is not recognized,” said Schiff. “Mr. Jordan I’ve indulged you with extra time, but my indulgence is wearing out.” Rep. Jordan responded by saying, “Our indulgence for you wore out a long time ago, Mr. Chairman, I can tell you that.”

Schiff threatened the gavel saying, “I’m about to gavel you down, so if you have a question, I suggest you ask it.”

“Do you think President Trump’s concerns [against corruption in Ukraine] were justified,” asked Jordan. Chairman Schiff called time and questioning went on to Representative Peter Welch.

Denny Heck, Julian Castro and other Democratic members of Congress were also permitted time to question the witness. The next public hearing will be held on Tuesday, November 19.