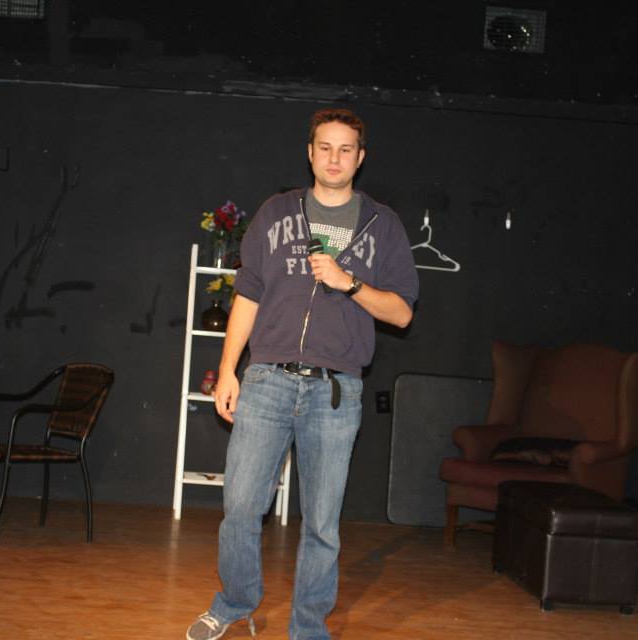 HELLO AMERICA! – Watching young actor Scott Javore work out in one  of the small theaters in San Fernando Valley took me back when Hollywood rocked with some of the most gifted actors and comedians of all time.  He is definitely one to watch.  My conversation with him was high powered and riveting.

MSJ: Scott, you’re a man of many talents.  When did you discover your passion for performing?

SJ:  When I was 7, my parents were having a dinner party one night, and I performed the balcony scene from Romeo and Juliet with my sister. I ended the scene by adlibbing, pucker up babe, to a roar of laughter. I was hooked.

MSJ:  When performing one of your rapper-poetic type speeches, you suddenly explode with emotions and language as if ready to declare war on the universe.  Where does this stem from?  Is it being aware of what’s happening around you or personal experiences?

SJ: Rap is my creative outlet when I’m feeling angry or frustrated.  It is a cathartic way for me to express thoughts and emotions freely that might otherwise be repressed.

MSJ: What’s one of the most challenging things you’ve had to deal with as an actor on stage or film?

SJ: My biggest challenge has always been myself.  I have battled substance abuse throughout my entire adult life.  I am happily nearing my sixth month of complete sobriety.  When I was an active pothead and drunk, I barely pursued my career, I couldn’t.  Now I feel like I am just beginning and it excites me.  I welcome the problems of any working actor.

MSJ: When watching you on stage, you remind me of the energy and excitement that many of the guys had working in coffee houses and clubs throughout the nation during the fifties and sixties.  Who were some of the actors and entertainers that influenced the way you perform?

SJ: I’m flattered you say that. I hold that era and its performers in high esteem, particularly John Lennon and Marlon Brando. Eminem is an obvious contemporary influence.  His work has raised the standard of what it is to rhyme.  He has recently become conscious of his influence on people and has started using his powers for good.  I admire him for his growth and his commitment to sobriety.  Jack Nicholson to me is the epitome of a great actor.  He wrote the forward to my longtime acting teacher Eric Morris’ book “No Acting Please.”  I use a very similar process to Mr. Nicholson. He’s simply the best at it.

MSJ: Which way do you believe our industry is headed because of the new technology that is constantly changing?

SJ: Some of my most respected friends in the industry fear the future of film.  They see a shrinking number of profitable films, increasing difficulty acquiring funding, and a supersaturated sea of content.  I see change as an opportunity for growth and a call to raise the bar, so I do not share their fear. I’m much more focused on my future in film.

MSJ: After beginning your career in a kind of Hollywood war zone today, when you’re alone and look in the mirror who and what do you see? And how does it make you feel?

SJ: I see myself. I’m pretty sure I need a haircut, and I haven’t shaved today, but I feel pretty good.