BEVERLY HILLS—The U.S Department of Justice announced in a press release that Scott Quinn Berkett is expected in court on May 25, 2022. He was arrested for a murder-for-hire charge on May 21, 2021.

Berkett, 25, of Beverly Hills is facing felony charges for attempting to hire a hitman to kill a woman that rejected him. Berkett met the victim online, but after meeting in person the victim attempted to cut off their relationship. On September 28, 2021, in the case of U.S. v. Berkett, the court denied the defendant’s application to reconsider a request for early release.

Berkett is expected to go to trial later this month where he could face a mandatory sentence of 10 years in federal prison. Prosecutors have agreed to seek no more than 5 years.

Beverly Hills Man Arrested on Federal Charges of Attempting to Hire Hitman to Murder One-Time Girlfriend Who Had Rebuffed Him: Scott Quinn Berkett of Beverly Hills has been arrested on a murder-for-hire charge that alleges he tried to hire a hitman to k… https://t.co/nRmLyPgsrl

He sought out a group online from an area referred to as, “The Dark Web” to find someone who would murder for hire. Berkett unknowingly hired an expert in the field that works for the Federal Bureau of Investigations. The suspect wired a down payment of $1,000 with a promise to pay the remainder in bitcoin, and written instructions for the hitman on their arrangement. 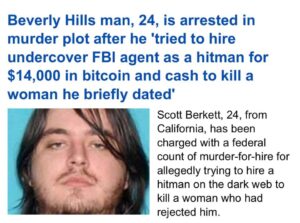 “I’d like it to look like an accident, but robbery gone wrong may work better. So long as she is dead. I’d also like for her phone to be retrieved and destroyed irreparably in the process,” Burkett wrote. The information provided to the FBI indicated that Berkett made Bitcoin payments totaling $13,000 between April 5 and May 5.

“An undercover FBI agent, posing as a hitman, contacted Berkett on Wednesday and eventually sent a photo of Victim 1, which Berkett confirmed was the victim, according to the affidavit. During the discussions with the purported hitman, Berkett demanded a proof-of-death photo that would show the corpse and Victim 1’s distinctive tattoo,” the DOJ stated.

If convicted, Berkett would face a statutory maximum sentence of 10 years in federal prison. Assistant United States Attorney Joseph D. Axelrad of the Violent and Organized Crime Section is prosecuting the case.