UNITED STATES—On Friday, June 24, the Supreme Court of the United States (SCOTUS) overturned its January 22, 1973 decision to allow abortion on demand in all 9 months of pregnancy for any reason in a 6-3 decision announcing no constitutional right to abortion. The decision will now be left up to individual states.  The Justices who voted in favor of overturning Roe v. Wade are Clarence Thomas, Samuel A. Alito Jr., Brett Kavanaugh, Amy Coney Barrett, and Neil M. Gorsuch.

“It is time to heed the Constitution and return the issue of abortion to the people’s elected representatives.  Alito had previously stated that the 1973 decision of SCOTUS was, “Egregiously Wrong and Deeply Damaging,” said Justice Alito in a statement.

“With sorrow—for this Court, but more, for the many millions of American women who have today lost a fundamental constitutional protection—we dissent. Enforcement of all these draconian restrictions will also be left largely to the States’ devices. A State can of course impose criminal penalties on abortion providers, including lengthy prison sentences. But some States will not stop there. Perhaps, in the wake of today’s decision, a state law will criminalize the woman’s conduct too, incarcerating or fining her for daring to seek or obtain an abortion. And as Texas has recently shown, a State can turn neighbor against neighbor, enlisting fellow citizens in the effort to root out anyone who tries to get an abortion, or to assist another in doing so.”

Legislators have trigger laws in West Virginia, Arizona, Wisconsin, and Michigan. Alabama was initially on that list.  On Sunday, June 26, Alabama Attorney General, Steve Marshall reported that abortion is now illegal in the state of Alabama after the court removed an injunction against the Alabama Human Life Protection Act. In the state of Michigan, abortion is still legal as a 1931 law on the books is currently suspended as it moves thru the courts. Over 63 million lives have been lost to abortion since the 1973 decision.

The following states have a 6-week ban on abortion: Georgia, South Carolina, Ohio, and Iowa.

California legislators promised an immediate appeal. Pro-abortion groups have threatened, a ‘night of rage’ after the decision was announced.

“The Los Angeles Police Department (LAPD) is working closely with our federal, state, and local partners to assess and identify any potential threats related to this group, and any other groups that may attempt to hurt the public,” said LAPD Chief Michael Moore.

I’m grateful today’s events were largely peaceful. Unfortunately some chose to enter the freeway posing a serious risk. Later a much smaller group fired pyrotechnics at officers. Our people strived to facilitate demonstrations while defending our people from dangerous assaults. 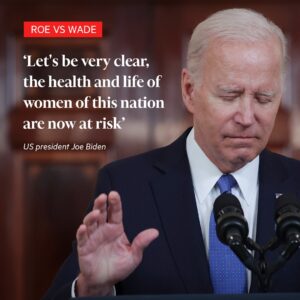 President Joe Biden and Speaker of the House Nancy Pelosi, who both identify as Catholics spoke out against the Supreme Courts’ decision.

Biden promises Roe v. Wade will be on the ballot in November. Pelosi called it, “A slap in the face to women.”

Pro-life advocate, Abby Johnson who previously worked in a Planned Parenthood Office, said, “This was a long time coming.”

The January 22, 1973 court case of Roe v. Wade involved an unwed pregnant woman named Norma McCorvey (Roe) who considered getting an abortion but did not.  Texas District Attorney Henry Wade was the Appellant in the case of Roe v. Wade.