SHERMAN OAKS−Pro-life advocate, Elisha Krauss shared via social media on April 24, that she was approached by a security guard at a Gelson’s supermarket, and told, the next time she came to the store not to wear that “controversial shirt” because he did not want her to start a fight. 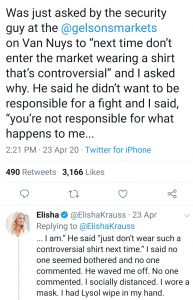 According to Krauss, the security guard did went on to argue that she should not wear the shirt because he did not want to break up a fight.

Krauss’s shirt was one by Liveaction.org that read, “Women’s Rights Begin in the Womb.” The incident took place at Gelson’s Market in Sherman Oaks.

Canyon News reached out to Gelson’s  for a statement. EVP/Chief Culture Officer BWR for public relations, Paulette Kam told Canyon News that the supermarket public apologized “for the completely inappropriate comment,” made by a third-party security guard at the Sherman Oaks location and was assured that the guard was immediately replaced.

The company that contracted the guard was contacted to ensure that the guard in question is not assigned to a Gelson’s location in the future.