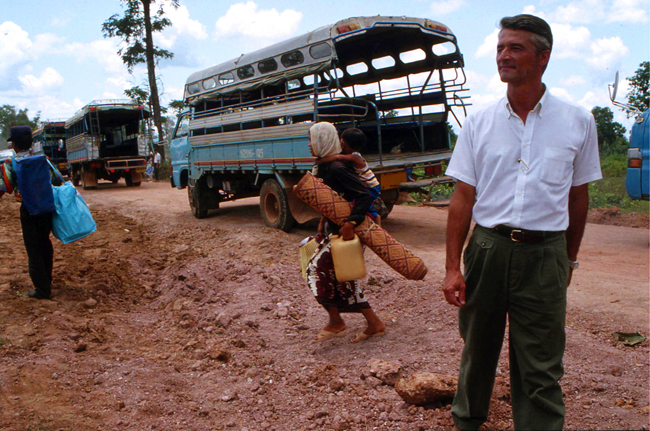 SANTA MONICA —Charismatic, charming and complex, Sergio Vieira de Mello was the U.N.’s “go-to” guy. He could descend into the most dangerous places, charm the worst war criminals and somehow protect the lives of the ordinary people to whom he devoted his life. On May 6, “Sergio” debuted on HBO. The gripping documentary tells the story of Vieira de Mello’s most treacherous mission to Iraq in 2003, when his own life hung in the balance. I found this documentary to be chilling and enlightening. Most Americans and Europeans have no idea what really goes on behind the scenes of warfronts, but “Sergio” attempts to put us right in that place.

Based on Pulitzer Prize winner Samantha Power’s biography “Sergio: One Man’s Fight to Save the World,” the documentary is the story of the dashing U.N. diplomat who served in the United Nations for more than 30 years, and was considered by some a cross between James Bond and Bobby Kennedy. A humanitarian of the highest order, his long career brought him to hot spots like Swaziland, Cambodia and East Timor, earning him praise for his hands-on work inside nations in crisis. In 2003, just after the U.S. invasion of Iraq, Sergio reluctantly agreed to serve as the Secretary General’s special representative in Baghdad. It was to be his most perilous assignment yet.

With visceral immediacy, filmmaker Greg Barker recreates the events of August 19, 2003, when Sergio was targeted by Al Qaeda terrorists. A truck bomb explosion ravaged the U.N. headquarters at Baghdad’s Canal Hotel, killing more than 20 people and wounding more than 100. “Sergio” chronicles the dramatic search and rescue attempt, combining harrowing testimony from Vieira de Mello’s fiancÃ©, fellow U.N. official Carolina Larriera, and the military paramedics who risked their lives to save him, with haunting footage shot on the day of the bombing, reenactments of the rescue attempt and flashbacks to key moments in Sergio’s remarkable life and career.

The explosion plunged Vieira de Mello and American professor Gil Loescher, who was in Sergio’s office, into a two-story hole, where they remained trapped by bricks and debris. Within minutes of the bombing, U.S. Army Reservist William von Zehle located Vieira de Mello and Loescher. Frustrated by the delay in the delivery of rescue equipment, Von Zehle and Army medic Andre Valentine spent hours trying to extricate the pair, using a woman’s purse and string to remove the bricks that buried the victims one-by-one. Eventually, Loescher was freed from the hole and helicoptered out after his legs were amputated, but Sergio, who had been blocked by Loescher’s body, was already dead. Exactly one month later, Kofi Annan presided over an emotional memorial at the United Nations.

The son of a diplomat himself, Rio de Janeiro native Sergio Vieira de Mello found his path in the early ”˜70s after he began working for the U.N. High Commissioner for Refugees in Bangladesh. By the time he reached East Timor, his reputation as a problem solver who could connect with common people and world leaders alike had made him a legend. Kofi Annan said Sergio was “the only top official in the U.N. system known to everyone by his first name.”

Samantha Power says, “The ideals that motivated him took life; they took flesh.” The U.N.’s Dennis McNamara referred to him as “one of the bright stars, maybe the brightest. He was the master magician, mediator, manager, massager of egos.”

A 2009 Sundance Award winner for Documentary Film Editing, “Sergio” was the final film edited by Karen Schmeer, A.C.E., who was tragically killed in early 2010.