ATLANTA—On June 18, the Georgia Sheriffs’ Association (GSA) and the Georgia Association of Chiefs of Police (GACP) condemned Fulton County District Attorney Paul Howard for his investigation into the death of Rayshard Brooks.

On June 12, Brooks, 27, had been sleeping in his car in the drive-through lane of a Wendy’s outlet until Devin Brosnan, an Atlanta Police Department (APD) officer, woke him up twice and made him pull over. Brosnan radioed a call for a DUI-certified officer to come, suspecting that Brooks was under the influence of alcohol. Former APD officer Garrett Rolfe arrived and performed a field sobriety test on Brooks—which he failed—before trying to handcuff him. Brooks struggled and grabbed an officer’s Taser, then tried to fire it at Rolfe while running away. Rolfe fired his gun, and two bullets struck Brooks.

Howard, who is running for re-election, announced numerous charges against both officers on June 17. The Georgia Bureau of Investigation (GBI) announced that it “was not aware of today’s press conference before it was conducted,” and that “we were not consulted on the charges filed by the District Attorney.”

The GSA accused Howard—who is the subject of a criminal investigation himself—of being politically-motivated, stating that he “is in the political fight of his life, and as part of his ongoing campaign strategy has chosen to hastily investigate and charge the two Atlanta police officers.”

Additionally, it is noted that shortly after Brooks was killed, the APD asked the GBI to “conduct a comprehensive investigation of the circumstances and facts surrounding the death.” The incident marked the GBI’S 48th officer-involved shooting investigation in 2020 alone. However, the GSA alleges that Howard “hastily conducted his own personal investigation before announcing he had secured warrants” for Rolfe and Brosnan.

“Through this grandstanding vote seeking tactic, Howard has trampled on the rights of Officer Garrett Rolfe and Officer Devin Brosnan and has further allowed this tragic incident to be more about his re-election than justice for the officers involved, the Atlanta Police Department and the citizens of our state,” the GSA added.

In a similar vein, the GACP said that “the established protocol throughout Georgia is for the affected police department to request the George Bureau of Investigation to conduct an investigation into any police use of force that results in the death of another person. After completing the investigation, the GBI forwards the report to the appropriate District Attorney’s Office for review.” The GACP noted that the GBI has sufficient “experience and resources” to investigate such a matter “in an objective, thorough and transparent manner.”

According to the GACP, Brooks’s death was “tragic” and “could have been prevented,” but he “made a series of fateful decisions that night which ultimately led to his death.” The association also alleges that placing the blame on Garrett and Rolfe is “the result of an unbiased review of the facts as we know them.”

Howard “has emboldened criminals being placed under legal arrest to actively resist and assault the brave men and women who protect our communities, instead of insisting they follow the lawful instructions of a police officer,” the GACP alleges.

“The Georgia Association of Chiefs of Police does not condone the unethical, illegal conduct of any officer. We abhor the inappropriate or excessive use of force by officers,” the GACP added. “At the same time, we do demand they be provided due process by their employing agency as well as prosecutors.” 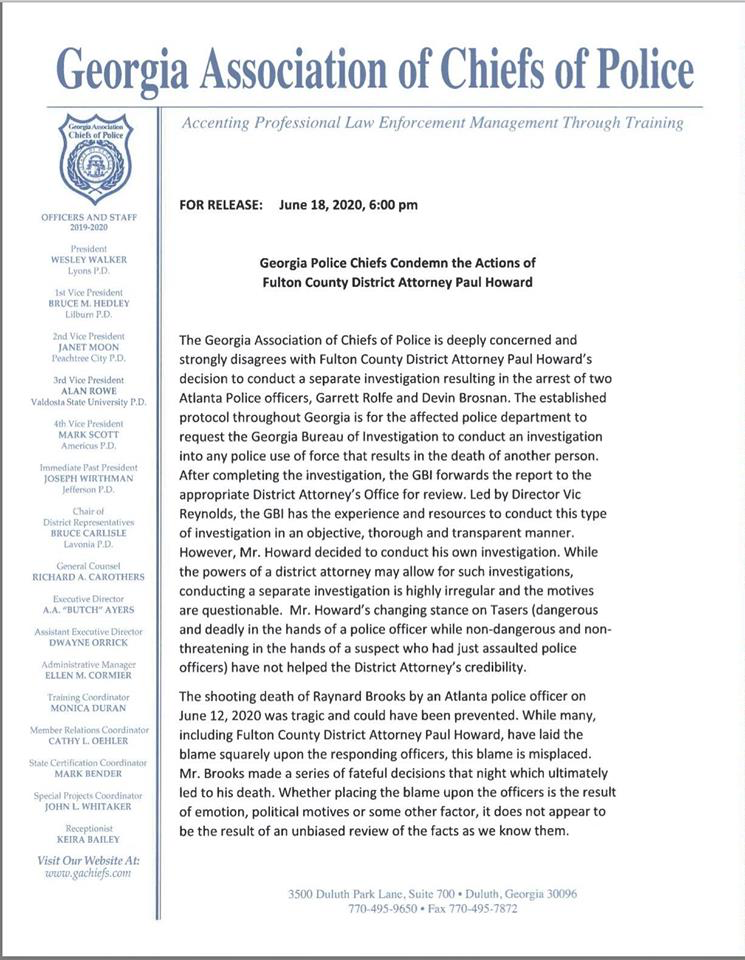 Howard finished second to Fani Willis in the June 9 primary election, gaining 35% of votes as compared to Willis’s 42%. Their runoff election is scheduled for August 11, 2020.