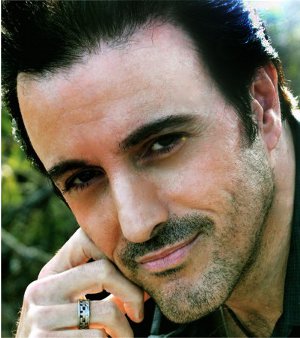 SHERMAN OAKS —Recently Canyon News had the opportunity to find a new star on the rise in Tinseltown. Actor, singer Patrick Basile is blowing away his musical competition and making strides every day toward superstardom. However, when writing about Patrick’s music, a very astute reader pointed out the handsome crooner is also an actor. This week the intriguing and charismatic star tells readers where they have seen him before. Like sands through an hour glass, Basile’s singing career is not only hot, but about to make history.

Q-Fans have been flocking to hear your music. Your recent CD is very popular, what was your inspiration for it?

A- “I wanted to sing songs that I like and knew that I would sing well. After the song ”˜Natural Man’ was added, the project started to take on this nature kind of thing. I even included the song ”˜Nature Boy’ that was suggested to me by a very good friend. His name is Glenn Boles. Even the cover has a lot of earth tones which the photographer Nick Alan pointed out later. I guess it all came together subconsciously, as a lot of projects evolve from.”

Q-You appeared on “Days of Our Lives,” what did you do on the show and how long was your run?

A- “I was on that show several different times from early to mid-90s. My longest running character was Paulo. I played villains, which was fun, because I am nothing like that in real life. The very first time I ever acted professionally was an under five on ”˜Days Of Our Lives.’ In the audition, I was asked to do a Russian accent . I imitated a German commercial that was running at the time, and got the part. I then went to my friend Ruth Buzzi, who does a lot of accents, and she helped me with the five lines that I had. I did it in one take, and it came off somewhat comedic. The scene got a write up in the Soap Opera Digest. They later would call me to do accents, and I always said yes!”

Q-Do you enjoy your music or acting career the most?

A-“Definitely music! It is what I eat sleep and drink. There is nothing like a really good performance night. The energy that you exude, is just amazing and great for the soul.”

Q-Will you be releasing anymore CDs in 2010?

A-“I hope to. I am working on a lot of songs now. ”˜Natural Man’ will be on iTunes in a few weeks. We will definitely let everyone know.”

Q-What is the one thing professionally you haven’t done yet that you hope to do before long?

A- “I want to do concerts with a completely live orchestra, like Chris Botti does.”

Q-What inspires you to sing?

A-“Singing is very therapeutic for me. Bringing me to the song, and creating as I go along visual images with the music is an incredible way to communicate my feelings. I also like the challenge that it brings. I always like to take chances. Go for that different sound, and make it as unique as possible!”