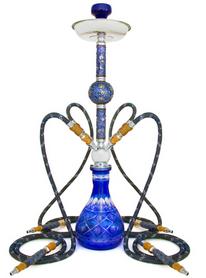 SHERMAN OAKS—The LAPD conducted a series of compliance checks on six hookah lounges in the Van Nuys–Sherman Oaks area and found them all to be in violation of municipal codes.

According to the LAPD blog from June 27, the checks were conducted by Van Nuys, West Valley and North Hollywood Units, Detective Support and Vice Division (DSVD,) the Los Angeles City Attorney Tobacco Enforcement Unit, Alcohol Beverage Control (ABC,) State Board of Equalization, and the State of California Labor Department.

The LAPD blog included the input of Van Nuys Officer, Brian Frost who explained that Hookah lounges themselves, are not illegal; however, the act of smoking in an establishment, whether it’s hookah, cigarettes, cigars, or vapor where food or alcohol is served is a violation of state and local laws.

To answer any further questions about smoking laws, the Los Angeles City Attorney’s Tobacco Enforcement Program can be reached by phone at: (213) 978-7970 or by email at: tep@lacity.org.

To those who would like to report the illegal use of hookah, or hookah lounges in violation of the above codes are advised to contact “Crime Stoppers at 1-800-222-TIPS (800-222-8477). Tipsters may also contact Crime Stoppers by texting to phone number 274637 (C-R-I-M-E-S on most keypads) with a cell phone. All text messages should begin with the letters “LAPD.’ Tipsters may also go to LAPDOnline.org, click on “webtips” and follow the prompts.”