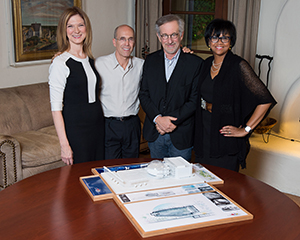 BEVERLY HILLS — A generous donation was given to the Academy of Motion Pictures Arts and Sciences for its brand new museum on Tuesday, November 19.

Dreamworks co-founder Jeffery Katzenberg and director Steven Spielberg, also a co-founder of the studio each donated $10 million each to aid in the construction of the new Academy Museum of Motion Pictures. In response to the gift, two of the main galleries of the lobby floor will be named to commemorate the donors: the Marilyn and Jeffery Katzenberg Gallery and The Spielberg Family Gallery.

“I am so pleased to join with Jeffery to help build this museum to celebrate, educate and preserve the arts and sciences of motion pictures,” said Spielberg in a statement from the Academy. “Having our family name on the lobby floor is a deeply personal way to show how much motion pictures and the Academy have meant to all our lives.”

The campaign for the construction of the museum is seeking to collect $300 million, of which it has collected about half, according to the Academy. Actors Annette Bening and Tom Hanks co-chair the campaign. In addition to these donations, the Academy has also accepted gifts from Academy Governor and producer Gale Ann Hurd, director Brett Ratner, and the Simms/Mann Family.

The museum itself is located next to the Los Angeles County Museum of Art and will feature over 290,000 square feet of exhibition space dedicated to the world of film. It is expected to be completed in 2017.