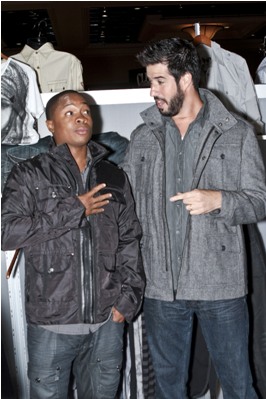 HOLLYWOOD—Fashion is theatre! From the Great White Way on the East Coast, to the film factories of the West Coast, whether it’s found nationwide on a favorite American sitcom or an isolated market like the Las Vegas strip, designers are always looking for faces that the public will relate with, if not want to emulate. Last week Hollywood and Vegas designers chose one of Hollywood’s biggest stars to model their fashions.

Romi Dames’s background may be in theater and sketch comedy, but she is perhaps best known by fans for her role of the nasal-voiced super snobby socialite, Traci Van Horn, on Disney’s hit series “Hannah Montana.” As the last season of the show comes to an end, Romi has plenty on the horizon to keep her busy as she prepares for a new film, tentatively titled “Child P.O.W.,” and she seems to be following in the tracks of other celebrated colleagues as a potential product spokesperson. Romi was just seen with fellow actor Sam L. Jones III, best known for playing Pete Ross on the first three seasons of the television series “Smallville,” in Las Vegas last week at the Magic Tradeshow and on “The Morning Blend” with fashion guru Alex That sporting his latest line Ksino clothes. A new line, known for its men’s wear, proudly announcing plans to release styles for women. “I would love to fashion myself after someone like be Florence Henderson,” declares Dames. “Even the Wall Street Journal has acknowledged her as a top leading spokesperson. The kind of respect, admiration and consumer appeal that she commands for just being herself, is enviable.”

Founder and CEO, Mr. That, has a proven track record as creator of the highly successful Caffeine Brand. “Caffeine was the minor leagues and Ksino is the major leagues,” says That. “I’ve always had a great experience at Magic over the nearly 15 years I’ve attended with my brands. But this year was even more exciting because we arrived already having so much support and excitement for my latest Ksino brand ranging from young Hollywood stars like Romi (Dames) and Sam (Jones III) to world renowned champion poker players. I love the grassroots brand buzz that seemed to be building before we really even formally introduced Ksino to the fashion world.”

“Casual elegance describes it perfectly,” explained Romi. “It’s comfortable, but you are excited to be photographed in it. That’s great for me, because I learned early on attending events that claimed to be casual, still required looking great. Ksino allows me the luxury of both.” “My children were so excited when they heard that I would be meeting Romi,” remarked That. “They immediately asked for autographs. Romi embodies Ksino perfectly-stylish, young, hip, popular, professional and fun.”

“There are clothes for work, and clothes for dinner, well, Ksino is clothing for the casino lifestyle,” says designer and brother of the CEO, Jeff That. “Ksino Clothes give that perfect look for walking down the strip, playing poker, or you name it.” Casino stores and retailers must agree, as numerous outlets are already carrying the Ksino line including Misura Men’s shop at the MGM, Monte Carlo in Las Vegas, The Borgata in Atlantic City, D. Fine at The Bellagio, The Men’s Store at The Mirage as well as Caesars Palace and the Rio.

“I’ve been excited to represent this brand from the first time I saw their line,” says product placement expert, Lisa Precious. “Because I knew that the new generation of Hollywood personalities like Romi or Sam and movie production costume designers would be drawn to its quality and style. They’re the ones that the public will take their future fashion cues [from].”