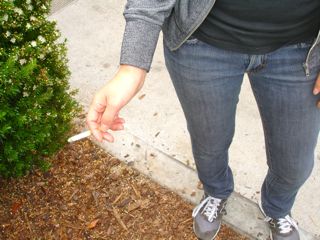 SANTA MONICA—On Thursday, September 9, a residential smoking law went into effect in the city of Santa Monica, which bans people from smoking within 25 feet of a door, window or vent in any multi-unit residential building including rental properties and condominiums.  The law is a protective measure by the city, which aims to deter smokers from using their balconies and patios to smoke as they feel it will have an adverse affect on the living experience and health of fellow residents.

The ban comes as a growing number of Santa Monica residents have requested stricter anti-smoking regulations, believing it to be a health hazard as well as a poor model of behavior for children living in multi-residential units.  However, some people are upset by the new law as they view it as an imposition upon their individual rights.  One woman, who recently moved into an apartment building in the Wilshire corridor area, spoke to Canyon News about the new law, “I think that when it comes to your own space and your own home, you should be able to have your own privacy. This seems drastic— like there could definitely still be a compromise”¦like designating half of the building as non-smoking.”

For those Santa Monica residents whose buildings will be affected, it is the responsibility of landlords to post signs in common areas of the apartment or condominium, which will remind residents of the law.  Tenants must also be notified of the ordinance by December 1, and it is up to residents to enforce the law by filing complaints when violations occur.  Anyone caught breaking this law will be ordered to pay a fine of $100.  Following this first offense, additional violations will carry increased fines of $200 for the second violation, and $500 for the third and any subsequent violations for the first year.

This action follows the banning of smoking on the Santa Monica pier, which will take effect this fall.  It is illegal to smoke on the beaches of Santa Monica, on the Third Street Promenade, at bus stops and also in parks.