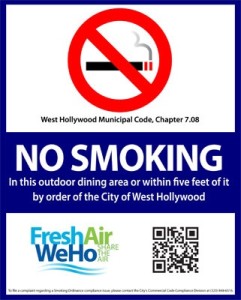 The Smoking Ordinance goes into effect January 1. It will prohibit smoking within 5 feet of any outdoor area which includes restaurant patios, cafes, food courts and any other areas in the city of West Hollywood.

The ordinance will also provide smoking cessation programs and information to citizens. The program is offered through the city’s Social Services Division as well as the Los Angeles County Tobacco Control and Prevention Programs.

The Smoking Ordinance is requiring businesses to submit a Smoking Operations Plan for city review that will outline what specific areas where signs will be seen in smoking and non-smoking locations.

The city of West Hollywood is LA County’s third-most largest region of citizens identified as smokers with 19.6 percent.

According to reports, secondhand smoke exposes more than 4,000 toxins to people many of which are known to cause cancer in humans and animals. The U.S. Surgeon General warns people that exposure to second hand smoke heeds no safe levels.

The West Hollywood city council have historically taken strong efforts on public health policies on tobacco use by restricting smoking in public places of employment and business areas in 1986. The city has also tightened the ordinance with respect to business and owner enforcement in 1999.

Businesses are ordered to post the “NO Smoking” signs in designated areas of locations where smoking is controlled by the West Hollywood Municipal Code. All of the signs must present a reference to the code as well as a phone number in case a complaint violation is to be filed.