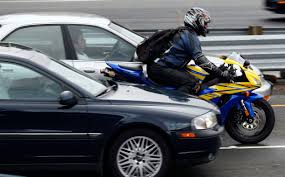 SANTA MONICA — In an effort to lower the risk of motorcycle deaths and injuries, the Santa Monica Police Department (SMPD) will be conducting a Motorcycle Safety Enforcement Operation on Saturday, February 15.  During the operation, extra officers will be patrolling areas most frequented by motorcyclists and that have a history of motorcycle crashes.

For added safety, the officers will be monitoring the behaviors of both drivers and motorcyclists, since both can be responsible for a motorcycle collision. The officers will keep an eye out for riders and drivers who are under the influence, speeding, making illegal turns and committing any other violations. The program will be funded by a grant from the California Office of Traffic Safety through the National Highway Traffic Safety Administration.

These efforts are in response to a dangerous rise in deaths caused by motorcycle collisions. Although fatalities dropped by 37 percent from 2008 to 2010, they rose again by 23 percent in 2012. These fatalities are often caused by behaviors such as speeding, illegal turns and intoxication. The risk of collision is increased even further because of the large number of inexperienced motorcyclists. According to a report by the Governors Highway Safety Association, “If the economy continues to improve and gasoline prices remain high, then motorcycle registrations, travel, and fatalities will continue to rise unless active measures are taken.”Â

To prevent accidents, the SMPD advises motorists to watch out for other motorists especially when making turns and changing lanes, and split lanes with discretion. Motorists who want to know more about the rules of safe lane splitting can consult the Lane splitting General Guidelines at www.ots.ca.gov/lanesplittinggeneralguidelines.pdf.

They can also receive training through the California Motorcyclist Safety Program, which can be accessed at www.CA-masp.com or 1-877-743-3411 (1-877-RIDE-411). For more information regarding the safety enforcement operation, contact Sergeant Phillbo Rubish at the Santa Monica Police Department’s Traffic Division at 310-458-8950.