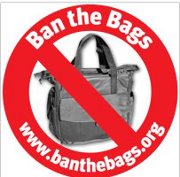 TOPANGA—The second phase of the Los Angeles County plastic bag ordinance took effect January 1 in many unincorporated cities such as Topanga and Wrightwood. The ban will affect “drug stores, pharmacies, grocery stores, convenience food stores, foodmarts” and other small establishments, according to the ordinance’s text.

The beginning of the law, which banned plastic bags from larger supermarkets, took effect July 1 and caused a stir among some store owners. Any store selling grocery or other food and drink items is barred from packaging items in plastic bags. Paper bags, provided by the stores, carry a 10 cent surcharge and are discouraged. Reusable bags of any material may be used in place of these bags at no charge.

“We used to use plastic bags a lot,” Cindy from Fernwood Market in Topanga told Canyon News. “A lot of people are aware of the change, and in the long run, it’s not such a bad thing,” she continued.

Some are not so enthused about the law. BagTheBan.com, a website opposing the plastic bags ban, is at the forefront of the opposition to paper bags. “On a per bag basis, plastic grocery bags are the best checkout option for our environment,” according to a BagTheBan fact sheet. “They take up a lot less space in a landfill. 1,000 plastic bags weigh 13 pounds; 1,000 paper bags weigh 114 pounds,” the report continues. BagTheBan is run by US-based Hixley, the leading manufacturer of recycled content high density polyethylene (HDPE) bags.

Nationwide, bans of plastic bags have been proposed, and currently five states including  Maryland, Illinois, Texas, Colorado, and California (as well as the District of Columbia) have either implemented legislature banning plastic bags or are in talks to ban these bags from stores.

“It’ll be a while for them to get into the habit of bringing their [reusable] bags,” Cindy concluded. Some of these bags can be used up to 125 times without fail, according to a report from Roplast Industries, a reusable bag producer based in California.