UNITED STATES—Jesus said it. Martin Luther King said it. James Garfield said it. Even Gloria Steinem and Bill Cosby have been quoted as saying it some way, shape, or form. It makes sense doesn’t it? The truth can set us free, sure, but not if we are too scared to tell it. 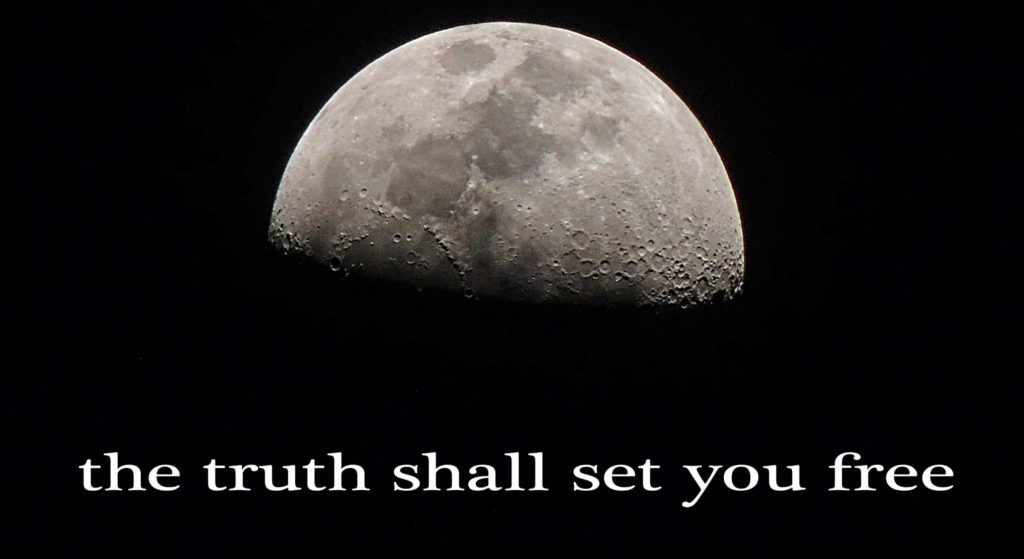 As far as my mission is concerned, the truth shall set us free, regarding widespread parental errors we are making with our American youth.

We are homo sapiens aka WISE MEN and that means we acknowledge our faults and mistakes and then learn from them. I know what I did wrong in the parenting department and I am sure you do too.

Furthermore, everyone talks about wanting change yet we are unwilling to come up with a cohesive admittance of what exactly went wrong. Why we need change. Change from what? What has who done wrong? EXACTLY!

Instead we just mind our business and speak when spoken to. Don’t rock the boat and just hope for the best. Stuff it, keep it quiet, clean your own closet and don’t whine or complain because nobody REALLY cares. Other people have bigger problems, feel grateful because things could be worse.

I FOR ONE THINK THIS EXACT MENTALITY IS A BIG PROBLEM. 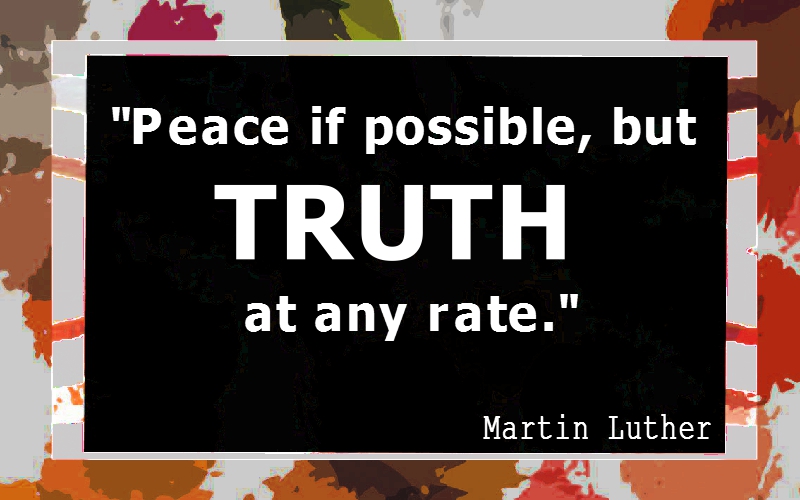 We do not live in a silent America anymore, and it is therapeutic to vent.

Think about how it feels after you unload to a mental health professional, or dump your issues onto a stranger you will never see again.

The bartender, cab driver, or person stuck next to you on the plane. When you get it out, IT FEELS GOOD. It’s YOUR truth, good or bad, and sometimes getting it off your chest can make all the difference.

I first started thinking about this years ago while contemplating the effect living with unsaid secrets or truths have on one’s mental health. The guilt, angst, frustration, remembrance. The constant what if’s and ought to’s combine with the ever-present should’ve and would’ve’s, festering for days and weeks, until years go by and you still have that secret.

It could be a simple lie you told years ago, or one that manifested into something big. You just want it to STOP. Maybe it isn’t even a spoken lie. It could be a truth untold that causes you angst.

The friend’s husband who corners you inappropriately, but you are still too scared to make your friend upset by telling. We all know about the heat the messenger takes! 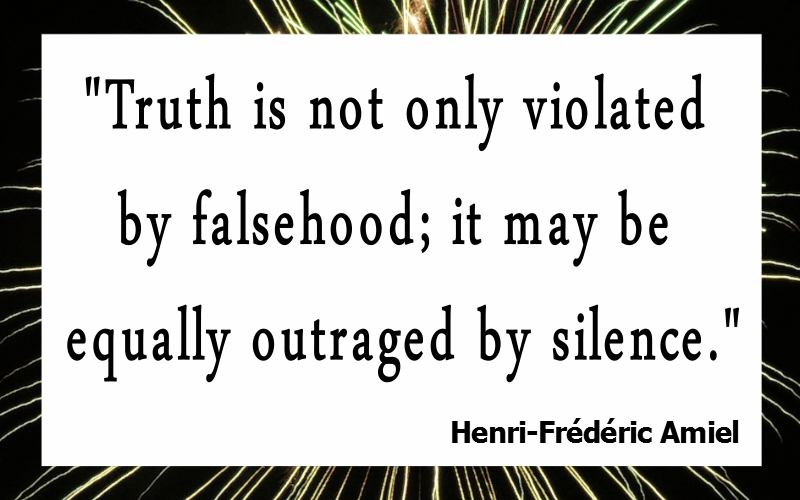 The boss or co-worker who raped, coerced, or extorted you into having sex and after 10 years you are STILL forced to deal with him or her daily. Some OTHER sexual crime committed against you, that you never told.

I BELIEVE (with all my heart and soul) that we repress our truths so much that it EATS US ALIVE, and not only in a metaphorical sense, but physiologically too (ex. gastrointestinal disorders, fibromyalgia).

Think about all those that are STUCK in a marriage because they won’t admit defeat or divorce: LIVING a lie. People raised with religious rules that prevent them being gay, BUT THE DESIRE EATS AT THEM. Cursed by a truth.

How many of you are killing yourself slowly with mental health medication simply because you are too scared to tell the truth about something? I think we all know by now, when we tell the truth, that truth will most likely spark CHANGE. 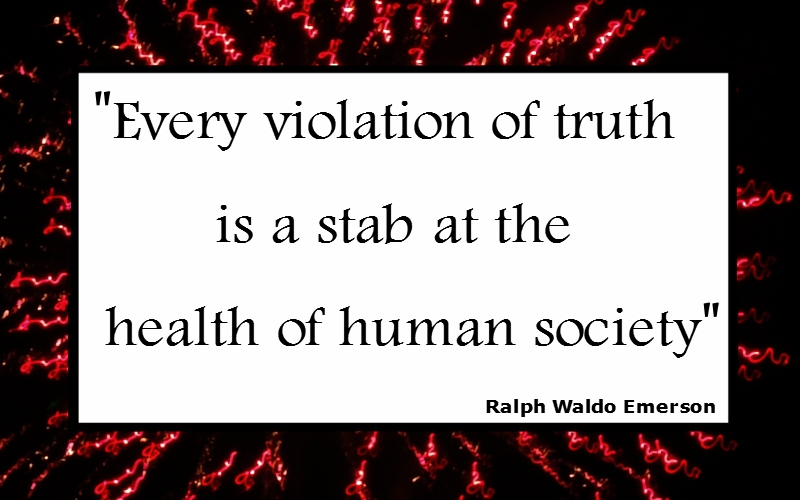 Does it not make sense that we should decide to tell our truth, so as to begin the process of GETTING OVER IT instead of walking around as one of the 324,124,794+ traumatized people in America with a chip on their shoulder?

I believe that we should make a day of it once per year.

Imagine what was epitomized in the movie The Purge, except we purge the foul bitter secrets and untruths that haunt our souls.

John Dryden once said, “truth is the foundation of all knowledge and the cement of all societies.”

So I have decided to nominate ELECTION DAY as TELL THE TRUTH DAY, here in America.

I think it should be a CITIZENSHIP DUTY, that if you use one of the many excuses not to vote, you should use the day to try to TELL THE TRUTH in order to start healing this country, and it starts one SOUL at a time. 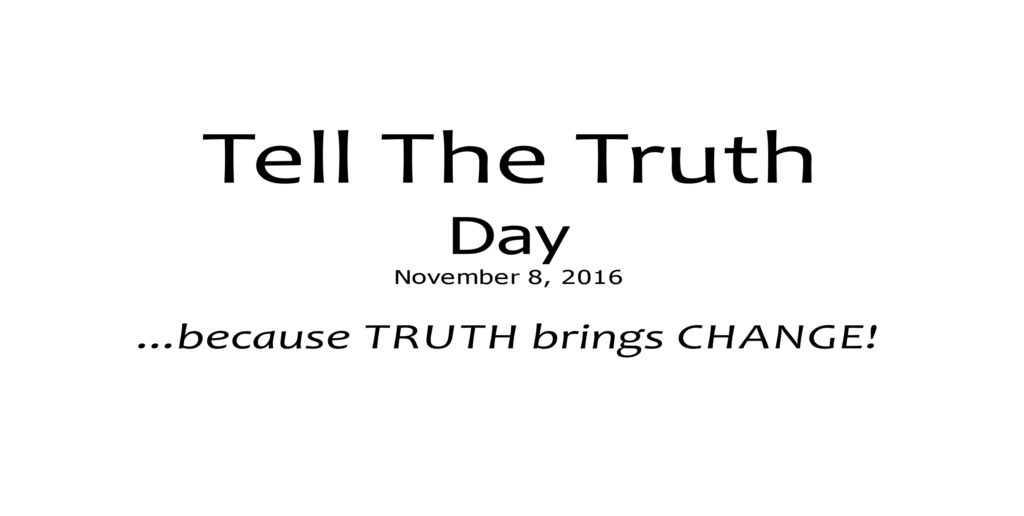