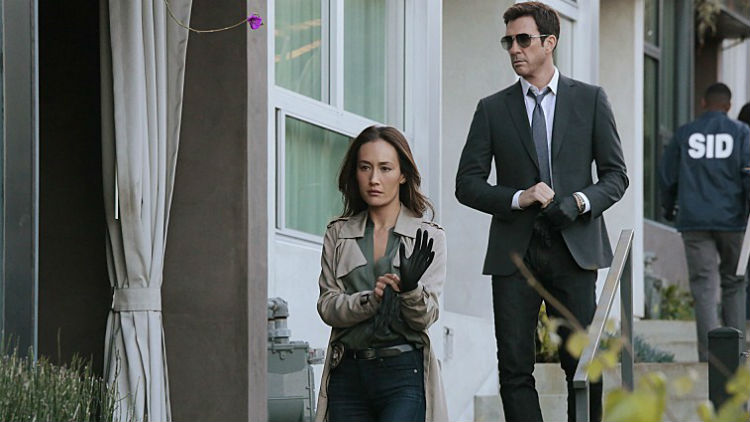 HOLLYWOOD—CBS is charting into dark territory with its new thriller series “Stalker.” Yes, while the title might appear quite polarizing, there is more to this show than the title itself.  The series stars Maggie Q and Dylan McDermott as detectives responsible for solving crimes that barter the lines of disturbing and creepy.

The opening sequence of the series follows a woman, portrayed by “Pretty Little Liars” alum Torrey DeVitto at the mercy of a masked man who attacks her. The scene was quite startling to say the least as the suspect threw gasoline on the victim and her vehicle before lighting it on fire ending in an explosion. Yes, the series decided to charter into a very dark place before we meet are protagonists of the series. We first get a glimpse of Detective Jack Larsen (Dylan McDermott) who is jogging as he stalks a woman and her child.

To the audience’s surprise it is revealed that Larsen is actually joining Lieutenant Beth Davis’ specialized Threat Assessment Unit of the LAPD, that specializes in stalking cases. So why is this tidbit important? Well because Larsen is a stalker himself, who has been secretly observing his ex and their child in an effort to stay close to them even though he’s been barred from being in contact with them. I have a feeling Larsen’s character will be venturing into a dark path as more about his past comes to the surface.

Back to Davis who is played with a calm demeanor and ferocity by Q who is able to turn on the compassion and dark side at any given opportunity. See her work in the hit series “Nikita” for those questioning her abilities. The pairing of a stalker who happens to be a detective, working alongside a detective who is a victim of stalking will indeed play out as the season unfolds.

The gist of the episode involved Larsen and Davis searching for the culprits responsible for that woman’s murder. It soon becomes apparent that the obvious red herring is the suspect, but he might not be working alone. Have you ever heard of a stalker having a co-partner? Not really, and I found that narrative twist a bit far-fetched.

Some may be surprised to discover the series was created by screenwriter Kevin Williamson, who’s responsible for the 1996 movie “Scream” as well as TV hits “The Vampire Diaries” and “The Following.” Williamson does indeed have a dark mind so seeing a series centered on the behavior of stalkers and the people who stalk them doesn’t seem to far-fetched from some of his previous works, particularly “The Following.” “Stalker” is dark, but not quite as dark.

I feel this series has a shot if it can begin to weave a narrative that creates clashes with our main characters. The final moments of the first episode reiterated for the audience just how cautious Beth is about guarding her home, especially since she could be the victim of a new stalker aimed at making her life a living hell.  “Stalker” airs at 10 p.m. on CBS.