UNITED STATES—Starbucks issued an apology after two uniformed officers who entered a local establishment were ignored by employees on Thursday, December 12. Officers asked to be waited on, but were never served. 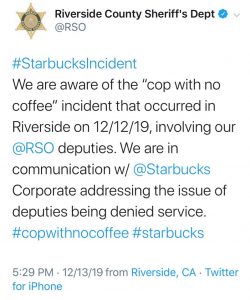 The Tweet went viral sparking a boycott known as the “Cop with No Coffee incident.” The new campaign was, “Dump Starbucks.”

On the July 4, 2019, six officers entered a Starbucks that in the Tempe/Scottsdale area of Arizona. Officers ordered and paid for their coffee when the staff came and asked the officers to leave because their presence was “making their customers feel uncomfortable.” The Tempe Officers Association is responsible for starting the campaign.

Law Enforcement Today reported that in response to the negative treatment of law enforcement officers, Navy Seal DeFranco and his wife Dana who own Battlegrounds Coffee have chosen to donate 50% of their profits to families of fallen officers.

Law Enforcement Today quoted DeFranco who said, “We woke up this morning and, well, WOW. We were absolutely BURIED in emails and messages and were completely humbled.”

Battlegrounds Coffee is a coffee chain that also has an online store.