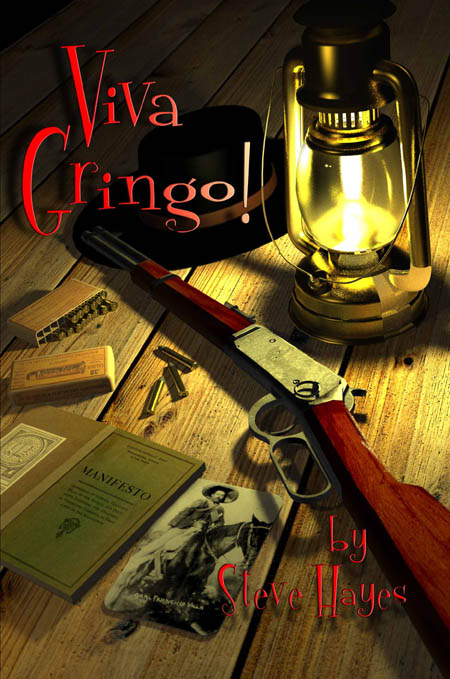 WhatsApp
Facebook
Twitter
Pinterest
ReddIt
Tumblr
Email
Print
BEVERLY HILLS—Steve Hayes is one of my favorite authors. His recent tome entitled “Viva Gringo!” caught my interest as it came across my desk recently. Whenever Steve writes, one knows they will not only be thoroughly entertained and engrossed in his words, but also that he only writes about a subject in which he is an expert. The new book, published by Bear Manor, is an amazing story, a wild ride and well worth the time it takes to read the story.
A few years ago Steve Hayes took a break from his very successful career as screenwriter and began publishing novel-length westerns. Many people wondered what this creative genius could come up with next. Wonder no longer.
U.S. Marshal Ezra Macahan picks the wrong time to visit his kid brother, Joshua, a cavalry soldier stationed at Camp Furlong, New Mexico. That night Pancho Villa and his revolutionary forces raid the nearby town of Columbus. The Villistas are defeated but during the battle, one of Villa’s ruthless commanders, Manuel “Scar” Acosta, kidnaps Joshua’s son, Daniel, and flees to his mountain hideout. Ezra and Joshua are about to pursue him, when they discover that their brother, Lt. Zachary, a recent deserter, was captured while riding with Villistas and now faces execution for treason. Ezra and Joshua visit Zach in jail. He agrees to lead them to Scar’s hideout, but only if they break him out. Ezra refuses, forcing Zach to escape on his own. The brothers ride after Scar, accompanied by Joshua’s fiery Mexican wife, Celia, who hopes to persuade her people to betray Scar’s whereabouts. But unpleasant surprises await them in Mexico, surprises that begin with Zach suddenly showing up and agreeing to lead them to Scar’s heavily-guarded hideout and culminate in his violent death and a shocking revelation by Scar that threatens to destroy Joshua’s love for Celia. Can Marshal Macahan overcome these adversities, rescue Daniel and save his brother’s once-blissful marriage or will they all be killed by Scar?
All of the action that takes place moves amazingly fast, the way we remember westerns in our childhood, but there is an exceptional eye the author possessed that engages his readers in a way that no one expects.  The author enthralls his readers with a lot of action, great detail and most of all character building and revelations that are filled with intrigue and masterfully storytelling.
“Viva Gringo!” is going to be one of those great novels that people will want to get dad for Father’s Day coming months from now.  This is a book that places the reader in a lost genre the way the superb Stone Wallace’s western tales lead the readers and this book is a must read for anyone who loves cowboy tales with a more fascinating and contemporary style.
Cover Photograph Courtesy: Bear Manor Publishing