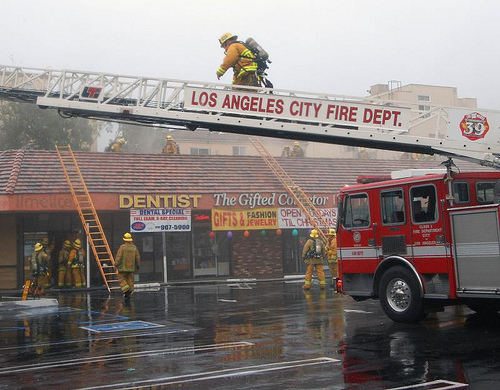 SHERMAN OAKS—On December 19, at 7:42 a.m., firefighters responded to an emergency fire at a strip mall at 15030 W. Ventura Blvd. in Sherman Oaks. Although the fire is still under investigation, an electrical issue is believed to be the cause.

According to a statement released by Erick Scott, spokesman for the Los Angeles Fire Department, over 130 firefighters—including 19 Companies of the Los Angeles Firefighters, five LAFD Rescue Ambulances, one Arson Unit, one Urban Search and Rescue Unit, two Hazardous Material Teams, two EMS Battalion Chief Officer Command Teams and one Division Chief Officer Command Team all under the direction of Assistance Chief Jeffery S. Mottram—were assigned to the fire, but the first 60 that arrived were able to get the blaze under control in 42 minutes. No one was injured.

Firefighters arrived at the scene four minutes after the fire was reported and teams rushed to the “light weight panelized roof to perform vertical ventilation of intense heat and smoke.” Other firefighters forced entry into the one-story building in order to tackle the heart of the fire.

Scott stated, “The origin of the blaze appeared to be from a unit that contained beauty supplies. However, flames extended to the adjacent businesses on both sides as well as the attic and mansard.”

It has been estimated that seven businesses were damaged. The financial loss due to the fire is still undetermined.