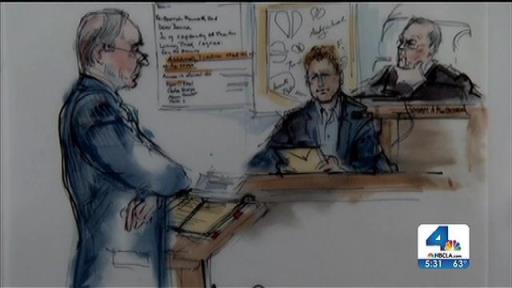 MALIBU — Actor Ryan O’Neal and the University of Texas at Austin (UT) continue to grapple in court over the fate of Andy Warhol’s portrait of Farrah Fawcett. At 2:45 p.m. on Monday, December 16, in Los Angeles Superior Court, the jury received the case after attorneys from both sides gave their closing arguments.

The portrait was painted in 1980 for an upcoming interview on ABC’s “20/20” news magazine. This was during the peak of both Fawcett and O’Neal’s careers. Fawcett skyrocketed to fame as the beautiful Jill Munroe in the TV show “Charlie’s Angels,” and O’Neal became known as a heartthrob after playing Oliver in the 1970 classic “Love Story.” The two had fallen in love while Fawcett was married to actor Lee Majors, and started dating in 1979. Fawcett and O’Neal became known asHollywood’s golden couple with a turbulent relationship that lasted for 30 years, marked by infidelity, cancer and the birth of a son. O’Neal was also a friend of Warhol’s who often visited the artist’s summer home in Montauk, NY.

According to O’Neal, Warhol invited both actors to come to his house. Fawcett, O’Neal and his daughter Tatum went to Warhol’s home in New York where he photographed Fawcett with a simple Polaroid camera. A few days later, Warhol gave two very similar silk-screen portraits of the actress, one for Fawcett and one for O’Neal, which he had promised in advance. A woman who produced the “20/20” segment testified during her deposition that O’Neal was not present with Fawcett during the posing, and that Warhol never promised to make two portraits.

In August 2011, the University of Texas at Austin sued O’Neal after the portrait was seen hanging above his bed in his Malibu home, in an episode of the reality show “Ryan and Tatum: The O’Neals.” The university claims several reasons as to why the disputed painting ought to be in its possession. Fawcett, who passed away in 2009, attended the university in the 1960s until she became an actress, and had agreed through her living trust to donate all of her artwork to her alma mater.

As a part of his closing argument, UT attorney David Beck presented clips from Fawcett’s own reality show as well as trust and insurance documents. The university is also trying to play up any evidence that shows how O’Neal and Fawcett’s relationship was not a happy one at the end of her life, bringing in a wide array of witnesses, including an old flame from Fawcett’s college days. The university already possesses the first Warhol portrait; the UT-hired appraiser has estimated the second portrait to have a price of $12 million, which is much higher than the $800,000 that O’Neal’s attorney claims it to be worth.

Several notable characters, such as Patrick and Redmond (O’Neal’s sons), as well as former “Charlie’s Angels” star Jaclyn Smith, appeared at the courthouse in support of O’Neal. The actor is countersuing the university for a tablecloth on which Warhol had written, “To Farrah F. and Ryan O.”