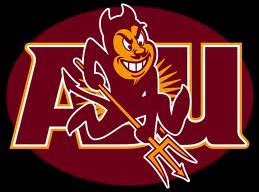 PASADENA—The Bruins attempt to make up for a disastrous first half came up short. The 13th ranked UCLA Bruins outscored the 17th ranked Arizona State Sun Devils 20-3 in the second half, but it wasn’t enough as they lost for the first time at home in a 38-33 loss.  ASU junior quarterback Taylor Kelly threw 20 of 27 for 225 yards and a touchdown for the Sun Devils sixth win in a row and clinches the Pac-12 South.

Arizona State ran the first quarter with two touchdowns from Kelly and running back D.J. Foster while their defense held the Bruins to a 42-yard rush that put them up by four. The Sun Devils countered on an interception four seconds into the second quarter as Carl Bradford caught the ball at the UCLA 18 to run it in for a 21-10 lead.

The game never got better for UCLA as second string QB Michael Eubank came in for ASU to score on a short run into the end zone. Kelly connected with wide receiver Jaelen Strong for 19 yards that ended the half and left ASU scoring 21 unanswered against the Bruins.

To keep the faith in staying bowl eligible, the Bruins came alive four minutes into the third quarter with Myles Jack scoring on a three-yard run that put a fire under his team. Freshman running back Paul Perkins added another seven on a short dash that put the Bruins down by 11 with a late field goal by the Sun Devils.

The Bruins were still hanging on in the fourth quarter as Shaquelle Evans scored on a 27-yard pass from QB Brett Hundley who connected with Evans for his second touchdown of the night. An undefeated streak at the Rose Bowl was not meant to be for the Bruins, as their final play in the fourth quarter on third and 30, where Hundley fumbled the ball in his hands and never got the play completed for the eventual upset.

Kelly carried the Sun Devils with 22 carries for 99 yards to set a match between themselves and Stanford in who will represent the Pac-12 in the Rose Bowl next year. UCLA went 8-3, but will have to clear their minds in what is their biggest game of the year against their rivals from USC next weekend.