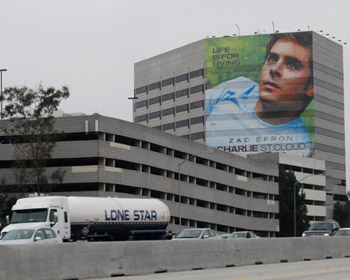 HOLLYWOOD—As of this month, L.A. City Council President Eric Garcetti presented a legislative motion specifically banning the use of large, excessive billboards throughout the greater Hollywood area, creating an uproar fueled by the Hollywood Chamber of Commerce.

According to Garcetti, “many new issues related to ‘supergraphic’ signs have occurred within the Hollywood Community,” and with that being said, he suggested placing a ban on all massive billboards across the area.

However, the Hollywood Chamber of Commerce opposes Garcetti’s decision.

“We do not agree with the ban on supergraphics,” said Leron Gubler, President and CEO of the the Hollywood Chamber of Commerce. He continued by saying that “the signs are an economic tool,” and that this was the organization’s main argument.

He did, however, agree to one aspect of the claim suggesting that the signage issues should be tightened, but made it clear that Garcetti’s motion to place a complete ban on Hollywood supergraphics was “not the best thing for the city.”

“Most of the complaints [that were made] were [businesses] who had illegal signage,” Gubler said.

When asked how the issue would affect economic progress throughout the city, he firmly responded, “It could hinder the process of major projects being built. We haven’t had a new [groundbreaking] project [happen] in about two years, so if there is any place [that can] have signs, this is the place they need to be; but it needs to be done correctly.”

Garcetti’s motion pertains to all Hollywood signage that is “geographically bounded” by the 101 Freeway on the north and east—including Melrose Avenue on the south, and La Brea Avenue on the west.

The Los Angeles City Council adopted Garcetti’s motion on July 13; the proposal was first introduced in February of 2009.

New developments regarding this issue are expected to unfold within the next month. According to President Gubler, the city planning commission has postponed the decisions until their next meeting, which is scheduled to be held on August 26 of this year.

President Gubler and his staff also have plans to meet with Garcetti to discuss possible resolutions to this issue. The date at which the meeting will be held shall be released at the organization’s discretion.