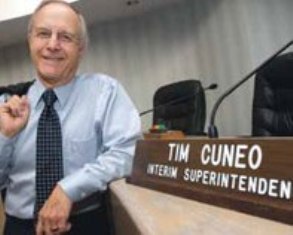 SANTA MONICA/MALIBU—Santa Monica-Malibu Unified School District Superintendent, Tim Cuneo, made a public apology on Thursday, March 3, after a memo was sent out by Cuneo suggesting that three former parent members of the Special Education Program Task Force would not be supporting the review of the special education program written by the Program Committee.

Cuneo wrote the memo to the SMMUSD Board on January 21. The memo reportedly offended three parents, Tricia Crane, Claudia Landis and Lee Jones, after it insinuated that they would attempt to sabotage arrangements with the city regarding a vital revenue proposition. In the memo, Cuneo stated, “The District is about to go into negotiations with the City on an agreement regarding our share of the Proposition Y and YY funds.  Based on past experience, I can anticipate that at least one of the three may attempt to sabotage the District’s efforts if they do not get their way.”

The memo also included letters written by each of the parents resigning from the Special Education Task Force due to their dissatisfaction from the outset as to how the Task Force has proceeded. “I am anticipating these three individuals will be very vocal in not supporting the report coming from the Program Committee,” further declared Cuneo’s memo.

When the memo was leaked, Cuneo apologized at the Board meeting on March 3. At the end of the apology, Cuneo said, “It was not my intent to offend or demean them. I am appreciative of the contributions that our parents have made, and have personally asked them to accept my apology. I am sorry and hope that this error on my part will not hinder us in working together for all students in the district.”

Board member of the SMMUSD, Oscar de la Torre, said to Canyon News, “The Superintendent is retiring in June and the Board is planning a retreat to improve our communications protocol and to assess our institutional culture. We will ensure that every employee on our payroll adheres to transparent, accountable, fair and honest government.” Canyon News asked how the board reacted to the incident and de la Torre responded, “As Superintendent Tim Cuneo stated, the memo was a mistake and the Board does not condone demonizing parents who oppose the views of administrators. We ensured that apologies were made and frankly we have to stay focused on the work of improving special education, without anymore distractions.”

In an interview with Canyon News, Lee Jones, one of the parents mentioned in the memo by Cuneo, stated, “I have accepted Tim Cuneo’s apology.  I will continue to work on improving education for students in the District (with or without IEPs). We will have a new superintendent starting this summer and I hope that the Board will remember what parents have been telling them for more than 15 years. I hope they will remember students when they make the decision as to who will take on the leadership of our school district and the much needed overhaul of a broken education system for struggling students and students with learning disabilities. We are not looking for a job in politics, only for our children to be educated appropriately so that they can have a job.”