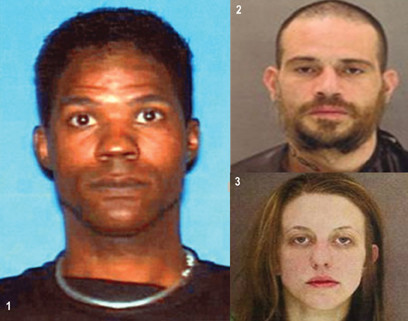 HOLLYWOOD—On December 13, a couple accused of dismembering and killing a Los Angeles man were arraigned in court, according to authorities.

On December 10, 36-year-old Edward Garcia Jr. and his wife, 25-year-old Melissa Hope Garcia, were apprehended through an operation arranged by the U.S. Marshal’s Service and the Los Angeles Police Department.  Tips led the task force members to an abandoned office building in Hollywood, where the pair was found living in unsanitary conditions.

“Today Newton Homicide Detectives with the assistance of the U.S. Marshal Services Fugitive Task Force unit, followed information received from news generated tips to the Hollywood area, where both Garcia’s were seen.  After several hours of investigation and surveillance, both Garcia’s were taken into custody without incident at a vacant building located on the 1600 block of La Brea,” stated the Los Angeles Police Department press release.

The building, located near La Brea and Hawthorne avenues, is just several miles from the area where they allegedly killed 49-year-old Herbert Tracy White. It is believed that the suspects had attempted to rob White, who reportedly was a good Samaritan who had helped them and given them money in the past.

The murder took place on Thanksgiving weekend at the Continental Hotel in Downtown Los Angeles where the Garcias had been renting a room for $40 per night. On November 29, a member of the cleaning staff discovered White’s body in the hotel room. The victim’s dismembered limbs were inside a backpack and the rest of his body was wrapped inside a blanket under a bed.  A 3.5-inch hunting-style knife believed to have been used in the slaying was also found.  According to police, “As detectives conducted the investigation, they discovered that the suspects attempted to clean up the scene and remove the body prior to leaving the location.”

The defendants, originally of Pennsylvania, have been previously arrested in their home state for other alleged robberies.  They are currently charged with murder with a possible special circumstance of torture and may face the death penalty if convicted.