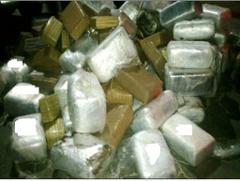 The three men, believed to be Mexican Nationals, were taken into custody on January 29 by U.S. Customs and Border Protection officers after the Mexican panga-style boat and more than 1 1/4 tons of marijuana were seized from along the Malibu coast.

The vessel was initially found by California National Guardsmen who were assisting C.B.P’s coastal operations and reported the discovery to local police. Members of C.B.P, L.A. County Sheriff’s Department, the United States Coast Guard and several other law enforcement agencies arrived at Point Dume State Beach shortly after 12 a.m., where they found the boat full with bales of marijuana weighing a total of about 2,575 pounds, and estimated to offer a street value of $1,287,500. The boat was located at Pirate’s Cove at Point Dume east of Zuma Beach, according to police.

The three suspects, who are alleged to have made illegal entrance to the U.S. via the boat, were arrested and later turned over to U.S. Immigration and Customs Enforcement’s (I.C.E.) Homeland Security Investigations (H.S.I.) for additional investigation.

Police report that after C.B.P. and its strategic partners cracked down on illegal smuggling by amplifying coastal border security operations in the San Diego and Orange County areas, reports have shown an increase in smuggling activity further north in Los Angeles and Ventura counties by transnational criminal organizations.

C.B.P. and its partners addressed this shift by reinforcing marine patrol and land-based surveillance efforts along with collaboration with the governor of Mexico.

These enforcement efforts are being conducted by the Department of Homeland Security’s newly installed Los Angeles/Long Beach Regional Coordination Mechanism, which consists of I.C.E. H.S.I., C.B.P.’s Office of Air and Marine, Office of Field Operations and the U.S. Border Patrol, the U.S. Coast Guard and several law enforcement agencies including the Orange and Los Angeles County Sheriff’s Departments and L.A.P.D.

U.S. Customs and Border Protection is the unified border agency within the Department of Homeland Security. One of D.H.S.’s largest and most complicated components, it is charged with the management, control and protection of U.S. borders at and between official ports of entry. Its chief mission is to prevent terrorists and their weapons from coming into the U.S. while also securing and facilitating trade and travel and enforcing hundreds of regulations including immigration and drug laws, according to the C.B.P. website.

A statement at the DHS website reads: “The Department of Homeland Security has a vital mission: to secure the nation from the many threats we face. This requires the dedication of more than 240,000 employees in jobs that range from aviation and border security to emergency response, from cybersecurity analyst to chemical facility inspector. Our duties are wide-ranging, but our goal is clear—keeping America safe.”