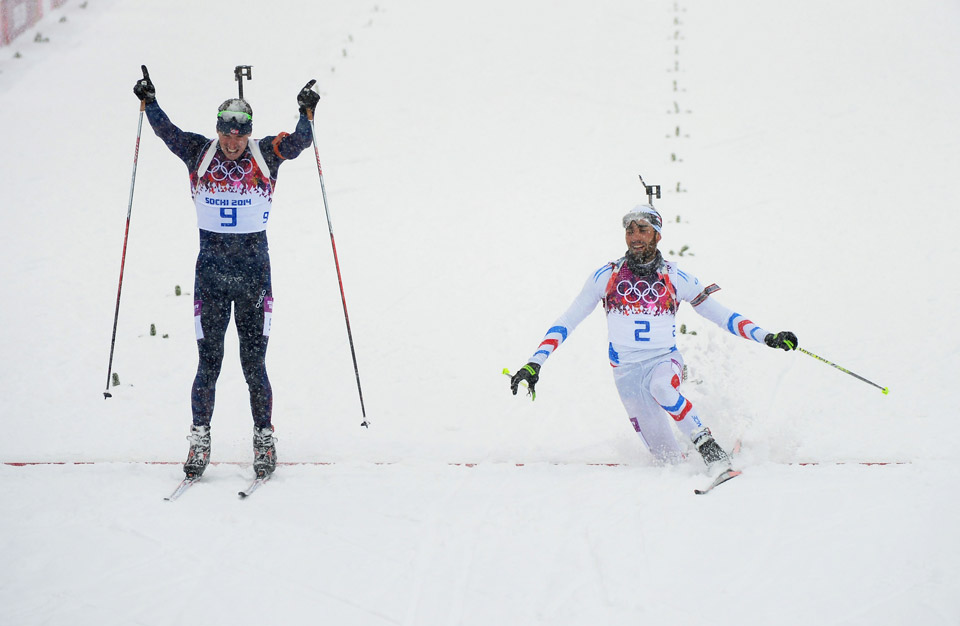 SOCHI, RUSSIA—Norway’s Emil Hegle Svendsen’s emotions ran in the closest finish of his life. The 28-year-old biathlete beat France’s Martin Fourcade by inches, as they both finished with exact times with Svendsen winning the gold.

After being postponed twice due to heavy fog, the start got underway when four men sprinted from the starting line through the wet snow that began to fall at the Laura Cross country ski and biathlon center. In the lead to the top of the hill was

Norway’s Emil Hegle Svendsen, who was looking to gain a medal in the remaining biathlon events. Russian Evgeni Ustyugov who is the defending Olympic champion crashed early on the first turn to fall to the back of the pack. Bjoerndalen made his way to the front with Svendsen as he was running out of time and events to break the record for most medals in the winter Olympics.

He brought the large pack into the stadium where the opening round of shooting took place with heavy wind and snow falling harder. He missed two shots with Fourcade and Austrian Dominik Landertinger missing as well. The big winner was Anton Shipulin who took the lead with Svendsen behind by 2.9 seconds.

Leading the pack in the second round of shooting was Evgeniy Garanichev from Russia who was the best chance for the host nation to win gold. Garanichev missed a target and was forced to do a penalty lap, giving Svendsen the lead back.

Canada’s Jean-Phillippe LeGuellec went clean along with France’s Jean Guilluame Beatrix to be the top three. American Tim Burke went five for five after missing two in the first round of the race.

At the halfway point Moravec led with a time of 22:30.2 with Svendsen, Beatrix and German Erik Lesser behind making up the small pack of leaders. Fog began to drift onto the course coming back into the stadium which didn’t seem to quiet the fans in the stands or the competition on the top four. Svendsen went five for five, shooting fast to take the lead and gain 1.6 on Moravec. Fourcade and Bjoerndalen made a huge comeback, taking third place 12 seconds back with the Norwegian 17.1 back in fourth.

Fourcade began to speed up fast to the leaders as the track was clean to make up lost ground before coming to the final round at the range. He successfully got ahead of both Moravec and Svendsen in a complete rush to gain his third gold medal in the sport this year. At the sprint to the range, Bjoerndalen sprinted to catch up with the leaders, as he wanted to make his best performance when he needed it most. The “King of Biathlon”Â made his worst time where he missed four targets to finish 22nd in the race, dashing all hopes for the Norwegian.

He came out first with Moravec and Svendsen trailing behind by four seconds. Fourcade continued to have trouble with his vision, as the snow got into his eyes with just three kilometers to go.  At the 13.8km mark, Svendsen turned up into a new gear and began to open the gap on his opponents. Fourcade kept up with the Norwegian as the two of them traded the lead with Moravec unable to keep up.

Svendsen overtook Fourcade at the turn, but it was not all over for the Frenchman. He came to a rush, going toe-to-toe with Svendsen where they both crossed the finish line at 42:29.1. Video evidence showed that the Norwegian crossed the line first by the shoe, to take the gold medal in a dramatic finish not seen in years. Svendsen began to slow down when crossing the finish line where his component continued to ski fast, but was short by inches.