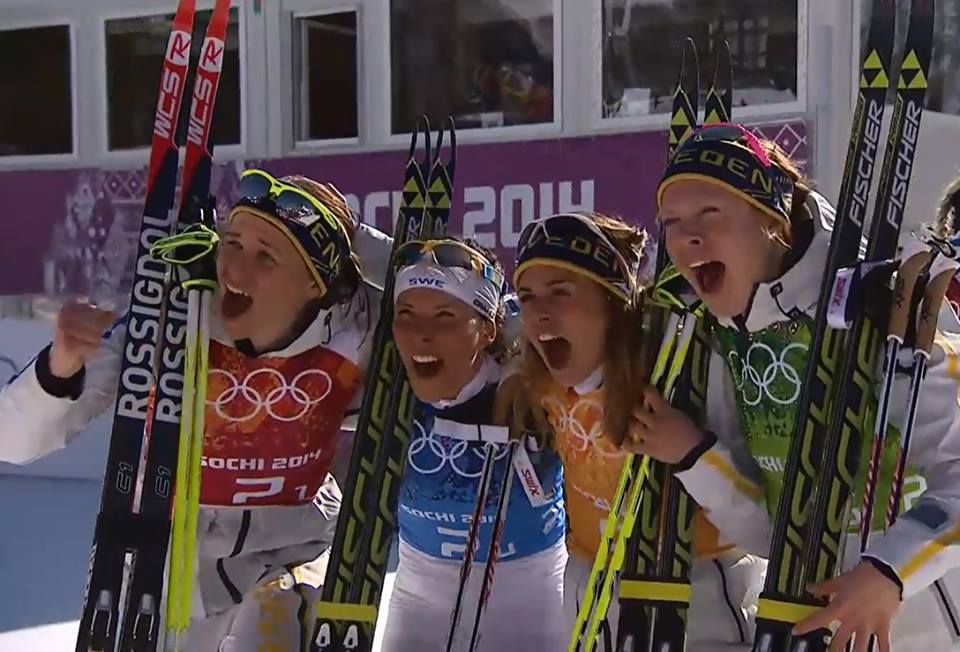 SOCHI, RUSSIA— Sweden won the gold medal in the women’s relay by the skin of their teeth. After a neck-and-neck race with Finland, Sweden’s Charlotte Kala beat out Finnish athlete Krista Lahteenmaki by five hundredths of a second to win gold in the women’s 4×5 km relay.

Germany took home the bronze as they finished nine hundredths of a second back in the closest finish in the sport. It was first time Sweden won the gold medal since the 1960 winter games in Squaw Valley,California.

The United States looked to be a much stronger contender as they finished fourth in the world championship last year. However, beating the strong teams that have been dominant in the sport would be a big hurdle to clear.

Finland took the lead in the first leg as Anne Kylloenen led the pack as they began with the classic part of the race. At the end of the first leg, the top three consisted of Russia, Czech Republic and Sweden, with Norway six seconds back in fourth. The Finns came to the line in ninth place with a pace that wouldn’t stay slow for long. American Kikkan Randall had a rough time, putting her team in 12th place 39 seconds back.

At the end of leg two, Norway continued to drop back while Sweden moved into first with Emma Wiken ahead of Saarinen while German Stefanie Bohler threw down a great performance sitting in third. Kertu Niskanen took over for the third leg as Anna Haag had trouble keeping the pace.

Germany’s Claudia Nystad stayed close to Niskanen at the 12.5km mark. The Finn’s pace had been opening up far ahead of the stragglers as the Norwegians were more than 22 seconds back.
Finland opened a three-second lead on Germany while Sweden sat 16 seconds behind. Their last leg was left for Charlotte Kalla who won back-to-back silvers in the 10km and 15km skiathlon.

The official gap at the third exchange was 5.8 seconds on the Germans while the Swedes were behind 25.7 seconds. Kalla took off with lightning speed in the final five kilometers to make the biggest comeback in cross country skiing. Denise Herrmann stayed close to Lahteenmaki with a gap of eight tenths.

Kalla cut her gap to 18 seconds, as she was aware that the Finn and the German were not fast enough to keep that big of a lead. Marit Bjorgen gave Norway hope once more as she was behind 26 seconds in fourth. At the halfway mark the gap was 13.2 for Sweden with only two and a half kilometers left.

Sweden began to close in on the pair as she gained a second on her opponents out front, making it a serious race to the finish. On the final climb Herrmann took the lead from Lahteenmaki at the 4.2 km mark as Kalla was now behind by four seconds. The Swede took no time to rest and sprinted on the downhill to be directly behind the leaders.

Kalla turned on the jets and flew ahead of Herrmann to take the gold in a time of 53:02.7. Lahteenmaki and Herrmann nearly made it a photo finish, but it was clear that she beat the German by four tenths for the silver. It became the first gold medal for

Sweden in this year’s event. With Kalla securing her team a major victory, the 26-year-old could help her team secure another medal in the team sprint classic on Wednesday.