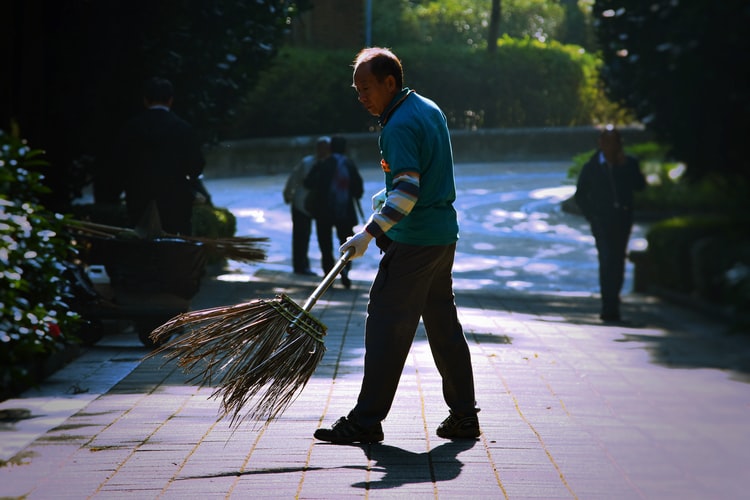 UNITED STATES—A good pandemic is not being wasted: it is sending science racing for answers and fresh ideas are not only being heard, but being implemented. For instance, on busy thoroughfares like Sunset with heavy foot traffic, pedestrian crosswalk buttons were suddenly phased out. Something I’d been dreaming about, especially as in recent times, as you’d have groups of people often blank out and not press buttons.

Eliminating this extra step for somebody having to cross the street. I mean why does the pedestrian have to go to all that work?

Now it’s time to being up one of my projects: to revolutionize street cleaning.

In Hollywood during The Big Weird, streets, along with the skies, have become cleaner than ever. As I walk my dog, certain piles of garbage are frozen in time. One notable example is a grocery cart without wheels, and jumbled around it for more than eleven weeks, an explosion of wigs, stiletto heels, styrofoam and rampant debris of electronic components, bags, socks, to-go packing, rampant debris in the zone denoting they were left by a colorful personality.

It bugged me every time I went around the block. When was somebody going to take care of it? I slowly realized that I was the someone to disturb its inertia. Let’s just start from the radical standpoint that the world inside and outside my door is equally outs. The big world is our home. This may be a new concept to some folks, novel as remembering now both a cellphone and a facemask.

This will be a novel idea to the folks who, unawares, deposit the condiment cups, the used lollipop stick and silvery mylar granola wrapper on our streets. At the end of the day, they may be out of sight by they endure as archaeological objects on our streets and in the gutters.

Now I have done something about it!

I grabbed a shelf grabber from Mom’s house. And I finally went out with a bag (plenty of those) and walked my dog. I filled two bags with choice garbage and sped to the nearest garbage can. We are lucky that way in Hollywood. We’ve got plenty of garbage cans installed in our local streets –which is a bonus for Hollywood, Los Angeles’ capital.

I believe truly in street cleaning over street sweeping which doesn’t cut it. In the Big Normal we were living before the quarantine, streetsweepers routinely left mounds of coke cans, dried foliage, and drink cups and the would remain week after week. Cleaning is an essential job. To be done superlatively requires hands and eyes. So consider this, streetsweepers supplemented by a multitudinous force of street cleaners equipped with brooms and grabbers will make our city gleam.

It is strange that municipalities make you don that highlighter-yellow vest and wield a broom as punishment. Sweeping the sidewalk was my first job for my dad. Cleaning is ennobling work: to beautify a place and bring others psychological peace through environments pleasing to behold.

In this new world of wonders a new valuation of trades and positions is in store. We shall come to see, truly, the dignity of all labor.

Grady Miller is the Wizard of Fiction.