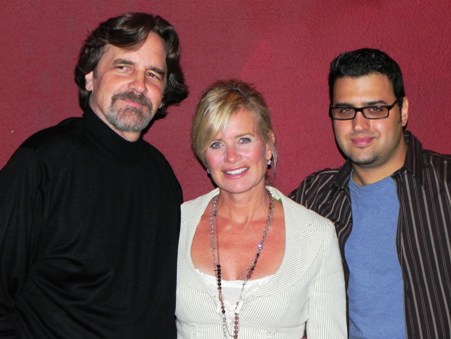 MALIBU—In our second part to Mary Beth Evans’s exclusive interview, the beautiful self-proclaimed beach girl discusses her work on the hit internet sensation “The Bay.” I caught up with the popular and talented star while she was on her way to the Rocky Mountains for the Christmas holiday. Mary Beth and I joked about her being too young to be a matriarch on a show like “The Bay.” “Initially it was a bit jarring, but then I read the script. Now I embrace it, Tommy. I get to work with Joe Lando, Tristan Rogers and Matthew Ashford, who I have known for decades, as we both were on ”˜Days of Our Lives’ at the same time. So now, I’m playing my age, so to speak. It’s actually very liberating. Women in Hollywood find it difficult to get older, but I’m just going with it,” said Evans.

Evans finds herself returning to the popular role of Kayla Johnson this month on NBC’s “Days of Our Lives.” “I love returning in these recurring roles on the show. Right now I have so much going on in my life that it’s a perfect fit for me. I am just glad that the show’s producers and writers still like Kayla and it’s always exciting going back. That’s where most of my fans that watch me on ”˜The Bay’ initially found me, now I’m known as the fairer half of the Patch and Kayla couple all of these years later. Stephen [Patch] and I have remained friends for years and he’s busy over at ”˜Y&R’ right now, so he can’t return with me. So I’ll miss him this time around,” said Mary Beth.

Evans also has high praise for costar Lane Davies and her executive producer, Gregori Martin, who also created “The Bay.” Evans says that Davies adds such richness to the series and Martin is unbelievable. “Lane is one of the nicest and most professional actors in the business. I’m so honored to be working with him. My husband has gotten used to me over the past 25 years working with so many handsome men, but he knows that he’s number one, so he never worries,” said the actress. “And what can I say about Gregori [Martin]. He’s taken an idea and created such a wonderful series that is at this point at its best. I love everything about the show, and my character. I also believe that because people are so busy now with their lives, raising their families and with careers that the shorter eight-minute sequence for each episode works out great for them. And it’s an exciting few minutes, thanks to the wonderful writing Gregori and his team have been doing.”

Evans is an actress who has remained unaffected by her superstar status in the entertainment industry. She embraces every role she’s given and she’s most gracious about her fan base. “Well, I would call many of them friends after all of these years. They have been there for me, supporting every career move I’ve made and many of them are like family. And in case you think of calling me a matriarch, Tommy. I suggest you pick ”˜beach girl.’ That describes me so much better,” concluded Evans.

She laughed the entire time she was doing the interview. Her positive energy and her beauty are captivating and her skillful acting is mind blowing. Evans can be seen later this month when Kayla returns to deliver the mother of all secrets in Salem. Mother, not matriarch. However, if you want to see Evans as the matriarch of “The Bay” tune in by going to thebaytheseries.com/.
“The Bay” is the best dramatic Internet series currently making the rounds on the Net. This show however is not going any place. Be sure to see the current episode, as it’s heating up for the big finale in February.