Throughout his television career, Philbin had several health issues including undergoing angioplasty in 1993, triple bypass surgery for plaque in his arteries in March 2007, and a hip replacement in December 2009.

Regis Francis Xavier Philbin was on born August 25, 1931. He was the son of United States Marine Frank Philbin. He was raised in the Bronx, New York and graduated from Cardinal Hayes High School in 1949. He attended the University of Notre Dame where he earned a sociology degree in 1953.

He served in the Navy and was last stationed at NAB Coronado with Lading Ship Squadron One, serving as a Supply Officer. He initiated his career in TV and received his own show in San Diego called the Regis Philbin Show which aired in 1964. He kickstarted his career via his partner Joey Bishop on “The Joey Bishop Show.”

He was renowned on talk shows, appearing on A.M. Los Angeles and Regis Philbin’s Saturday Night in St. Louis. He moved back to New York in 1983 and hosted “The Morning Show,” which was renamed three years later as “Live! With Regis and Kathie Lee” and renamed once more in 2001, “Live! With Regis and Kelly.” He hosted “Who Wants to Be A Millionaire” in 1999 and the first season of “America’s Got Talent” with Pier Morgan, Brandy Norwood and David Hasselhoff and ABC’s “This Is Your Life.” 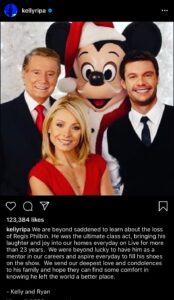 Philbin won several Daytime Emmy Awards for outstanding talk show host for Live! In 2001 and 2011 and Outstanding Game Show host for “Who Wants to Be a Millionaire.” He received a star on the Hollywood Walk of Fame in 2003 and a Lifetime Achievement Award from the Daytime Emmy Awards in 2008. He is also the recipient of the Guinness World Record for most hours on U.S. television.

Regis is survived by his daughters J.J Philbin and Joanna Philbin and his wife Joy, along with his first wife Catherine Faylen and daughter Amy Philbin.