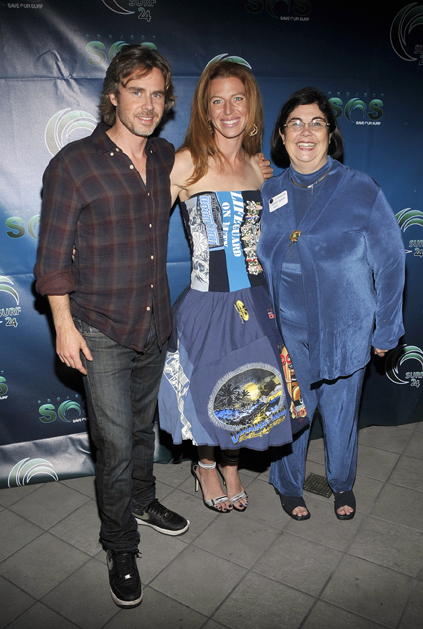 SANTA MONICA—Superstar film actress Tanna Frederick is excited to announce the upcoming debut of “Queen of the Lot,” a film which was shot almost two years ago in Bel Air. The film is the sequel to her 2006 acclaimed “Hollywood Dreams.” When that film ended, Margie was on her way to stardom and had just left Iowa to make Hollywood her home. When “Queen” begins, Tanna’s character has changed her name to Maggie Chase and she’s officially a star at a major studio in Tinseltown. What else has been happening in Maggie’s life? A couple DUI’s and the wearing of a Scram ankle bracelet which is due to her being put under house arrest. Maggie’s been in competition with star Lindsay Lohan for bad behavior.

The film, which includes a long list of Henry Jaglom’s great pictures for Rainbow Studios, is one that I even have a cameo in. I get to play myself, a Hollywood journalist, who sympathizes with Maggie’s plight, but I tend to meddle a bit much. We had a great time filming the scene and since that time Frederick has founded Project Save Our Surf and is now prepared to attend the annual Iowa Independent Film Festival next weekend. I will be attending with Tanna and a long distinguished list of film stars and moviemakers.

“Queen of the Lot” also stars Noah Wyle in the male lead role and lots of great performers and stars are also in the movie. Tanna tells Canyon News why the film festival means so much to her. “I went to my first film festival with “Hollywood Dreams” to the Ashland Film Festival in Oregon, and felt the atmosphere there was similar to my hometown in Iowa. My hometown, Mason City, Iowa, known for it’s film reference as ”˜River City’ in ”˜The Music Man,’ is the birthplace of Meredith Wilson and a hotbed of arts-theatre, music, the ”˜76 Trombones’ Band Festival Parade. The people in northern Iowa are incredible patrons of the arts, and I wouldn’t be where I am today, pursuing my dreams, had it not been for my community I grew up in. I called Richard Schinnow, an actor and professor in Iowa, and said, ”˜we have to start a film festival.’ We’ve been running it for four years now, and it keeps getting bigger,” said Tanna.

The recent Project Save Our Surf was the brainchild of Frederick. A daily surfer in the Santa Monica Bay, she has become an environmental activist. Tanna tells our readers why it meant so much to her and how June’s event touched her. “It was incredible. We raised $50,000 for Surfrider, Heal the Bay, and the children’s environmental organization Inside the Outdoors. I couldn’t believe I started with 35 people attending and surfing the first Project SOS three years ago, and ended up with 6,000 people at the event this year, with celebrities such as Sam Trammel (True Blood), John Slattery (Mad Men), Ingo Rademacher (General Hospital) and Tate Donovan (Damages) hopping on their boards to clean up our oceans, and attendees such as the mayor of Huntington Beach and Brandon Boyd from “Incubus” giving their support. It was breathtaking to watch the surfers at night also, surfing to the light of the HB pier at 4 a.m., with people on the beach rooting them on-all for preservation of our seas and precious marine ecosystems,” said Frederick.

Most of the talk at the post-event party was about Tanna’s one-of-a-kind dress. Frederick laughed when I asked her about it, then the actress replied, “I loved my dress! Angela Johnson, the designer, is fabulous. I came across her designs randomly on the Internet. She creates eco-savvy dresses out of second hand tee shirts, and found all surf themed and ecology themed used tees and sewed them together to make that adorable dress-I love that her designs are so cute while being friendly to our earth as well-and I got a ton of compliments on her creation!”

Frederick is excited about next week’s major event in her life. When asked who will be attending the Iowa Independent Film Festival, a beaming Tanna concludes, “Well, the ever sought out actor Tommy Garrett, for one, will be there, which is certain to draw HUGE crowds this year with his breathtaking performance! Mark Rydell, director of ‘The Rose,’ ‘For the Boys’ and ‘On Golden Pond’ will be receiving the Lifetime Achievement Award this year, award winning director Charlie Matthau will be showing a sneak preview of his film “Baby-O” starring David Proval and Teresa Russell, Kathy Zuckerman (otherwise known as “Gidget”) will be there with her documentary about growing up as Gidget. Forbes magazine recently featured Julie Davis as one of the top female directors, and she will be there with her new release ”˜Finding Bliss’ starring Leelee Sobieski, Jamie Kennedy, and Denise Richards. Zack Norman will be at the festival with his new film as well, called ”˜Overnight’ and a ton of other filmmakers from across the country.”

“Queen of the Lot” hits theaters nationwide in November.

Photograph of Tanna Frederick and Sam Trammell by Rainbow Films from Tanna’s private collection. Hair and makeup by Sherylnn and dress by Angela Johnson