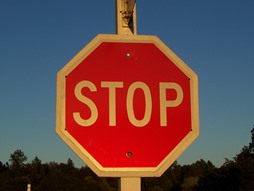 SANTA MONICA—In an effort to improve public safety for pedestrians at the intersection of Olympic Drive and Avenida Mazatlan in Santa Monica, a simple, effective and environmentally friendly device was recently installed at the location: the completely solar-powered BlinkerSign from TAPCO Inc.

The BlinkerSign went into operation at the southwest corner of the intersection on October 5.  Identical in appearance to a standard stop sign, the BlinkerSign is encircled with flashing red LED lights that shine clearly during both day and night. When needed, the sign relies on battery power accumulated during daytime. The sign is the first of its kind to be commissioned for use in the entire state of California.

The sign aims to cut down on the number of “blow throughs” and rolling stops at the intersection, which have raised many complaints about pedestrian safety. The intersection receives constant traffic from pedestrians traveling to and from various local public facilities such as City Hall and the County Courthouse.

Santa Monica Principal Transportation Engineer Sam Morrissey states that early first-hand observations of the sign’s effectiveness have been positive, and that the sign has been especially effective during early morning hours and at night, when pedestrians are most vulnerable.

The sign is currently scheduled to be in operation for 90 days. Should the sign prove to be highly effective, the lease will likely be renewed, and other BlinkerSigns may show up at other spots in the city.

How To Save A Little More