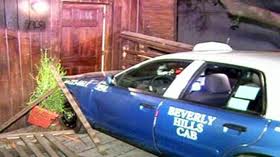 BEVERLY HILLS—On Wednesday, August 4, at about 9:05 p.m. in the 7100 block of Woodrow Wilson Drive near Cahuenga Pass, a taxi driver by the name of Robert Kazaryan, 45, was charged with assault with a deadly weapon when he crashed his Crown Victoria into a house.

The passengers of the taxi were an Italian couple on their honeymoon. They had taken a cab from Beverly Hills to a Los Angeles home only a few miles away, but the taxi driver took a route that took nearly an hour, between Mount Olympus and the Hollywood Hills.

The cab driver wanted to charge them about $35, but the couple offered the driver $26. At that point, they paid him the $26, and began to walk towards the residence. The cab driver left, made a circle to head back, and smashed in through the front of the house as the man inside was about to open the door. As a result, the resident suffered an arm injury.

According to the Los Angeles Police Department reports, the taxi driver claimed he confused the gas for the break and that it was an accident.

Robert Kazaryan remained in jail on Thursday on $30,000 bail.