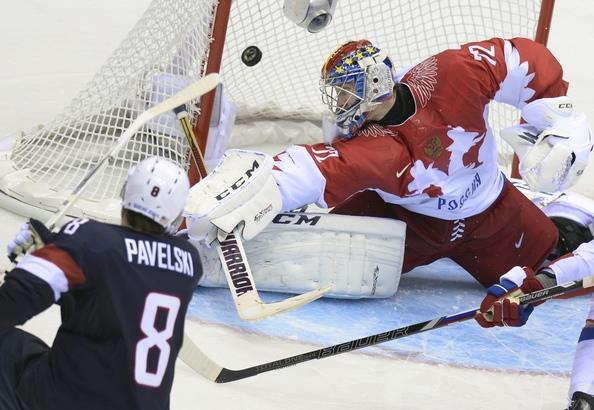 SOCHI, RUSSIA—TJ Oshie was put in the world’s spotlight and couldn’t have handled it better for the United States in a 2-2 tie that sent the game into a shootout. The St. Louis Blues forward scored four goals in a row, ending the stalemate in the eighth round to defeat Russia 3-2 at Bolshoy Ice Dome on Saturday night.

In what was to be the most talked about game between the two nations since “The Miracle On Ice,”Â
Russia and the United States opened their second game in the preliminaries with Russia having home ice for the first time ever.

The arena and the area outside were packed with thousands of Russians including President Vladimir Putin who put all he had in bringing the winter Olympics to Russia.

The host selected Detroit Red Wings center Pavel Datsyuk to be captain of the home team. He began the first period with his team staying calm and collected until the US began their offensive patterns. On a play in front of Russian goaltender Sergei Bobrovsky, Ryan Callahan and David Backes got into a scuffle with Evgeny Medvedev after Callahan took a shot high that Bobrovsky caught with the glove save. It would be a short fight that was seen in the game, but the physical part of the game would stick around through regulation.

Russia outshot the Americans 13-10 with each notching half a dozen scoring chances, indicating an even-strength game through 20 minutes.

The second continued much like the first with neither goaltender giving up any cheap goals with millions of people watching. The Russians and Americans traded time with the puck but after clearing half the game off the clock it was time for Russia to make a break for the lead. On a faceoff in their end, a pass play behind the blue line was set up by Andrei Markov and Alexander Radulov. Markov sent a stretch pass to Datsyuk who broke through three US defenders to take a shot around Jonathan Quick that went off the post, and into the net.

The crowd erupted with their home team scoring first as it became Datsyuk’s first goal for the team.
Russia made a serious mistake in the ninth minute of play where a 5-on-3 went in favor of the
US and surprisingly went silent with Russia’s defense making blocked shots to negate the two-man advantage. The lead would later be challenged by the United States since they had great players to score on Bobrovski as Cam Fowler tied the game during the power play.

With four minutes left in the period, James van Riemsdyk moved quickly, with time running out on the man advantage where a shot in front of the crease went off the skate of Fowler. With the game tied, the Americans had the better numbers with the US outshooting Russia 13-8.

The third period began to feel like both teams were playing for the gold medal as one had a reputation to uphold while the other had history on its side. Joe Pavelski helped his team take the lead on their third time on the power play. On the faceoff in Russia’s end, the Americans won the puck that Kevin Shattenkirk took to send it down the boards to Kane. While the passing took place on the end Pavelski crept up on the stick side of Bobrovsky, then took the pace where a window of opportunity helped Team USA go up by a goal.

The US made a critical error as forward Dustin Brown was sent to the penalty box for interference, giving the Russians a big chance to tie the game. Datsyuk took the responsibility of making it possible with a shot that seemed to go perfectly through traffic.

Russia caught one last chance to score with Fedor Tyutin driving a shot behind Quick to gain the lead with four minutes left in the game. Quick made a gesture to the refs that the net was dislodged seconds before and that the goal should be waved off. His argument surprisingly was talked over and later determined to be acceptable to wave off Tyutin’s goal. The game had to continue despite the Russian contingency being upset about the rule.  Both teams continued to try anything to finish the game in 60 minutes, but neither relented, forcing five minutes of overtime. The
US took just eight shots on net with Russia recording seven for themselves; it would be a hard-fought moment with everyone on the edge of their seats.

The short period brought no relief to Quick of Bobrovsky, as they saw five shots combined with the game moving into its critical point: the shootout. Unlike the rules in the NHL where a set list of players must shoot one by one, the coach can send the same player out to take the shot or send out a number of players to take as many as it would take until the end the game.

Team USA sent out Oshie, van Riemsdyk and Pavelski to go against Bobrovsky while Quick had to face Evgeni Malkin, Ilya Kovalchuk and Datsyuk.

The US took the lead in the first round with Oshie shooting in the first of many ways to break Bobrovsky. The Russian netminder would not allow others to score, stopping van Riemsdyk and Pavelski with saves. In the fourth round the Russians sent Kovalchuk once more to face Quick when Kovalchuk scored on him to save the game and move into extra frames.

Datsyuk scored in his second attempt where he helped Russia put all the pressure on the Americans and Oshie who seemed to be the man of the hour for the US. Oshie and Kovalchuk traded goals and misses going all the way to the eighth round. “I kept looking back, seeing if anyone else was going to go cause I was running out of moves,”Â said Oshie. The Russians took their shot with Kovalchuk missing, leaving Oshie who has been up for the US the last four times to end it.

He put the game in the hands of the Americans with a shot through the legs of Bobrovsky in what turned into his sixth shot in the shootout. “I kept the goaltender guessing on what I was going to bring to him,”Â he said. “It was a little nerve-racking but I got through it.”Â Quick is now 2-0 as he made 29 saves against Russia with Bobrovsky stopping 31 in his first start of the Olympics.  The Americans have little time to celebrate as they face Slovenia in less than 24 hours, where Quick’s teammate Anze Kopitar has been turning up the heat on opponents.