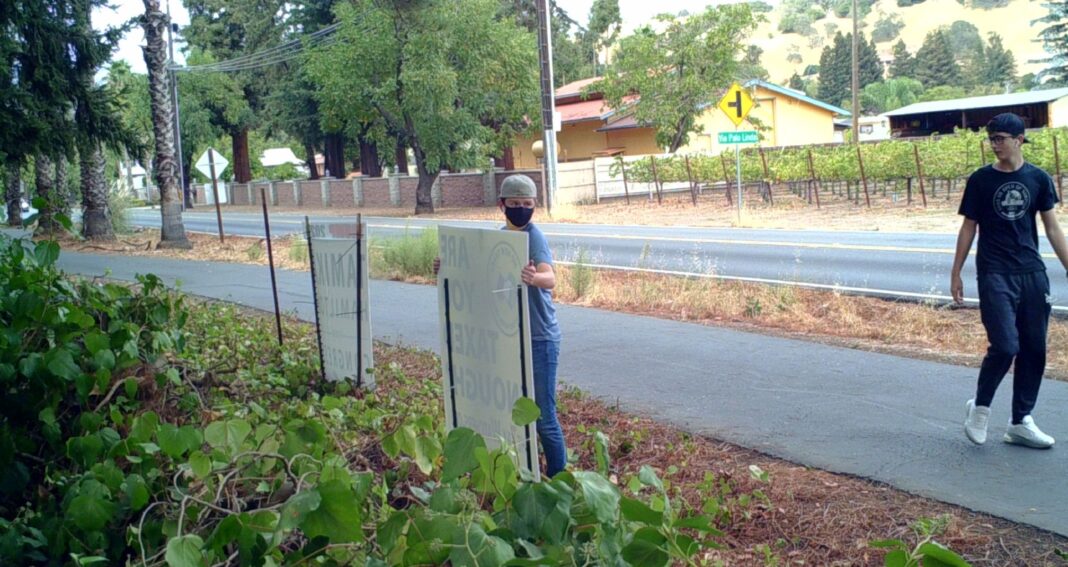 FAIRFIELD, CA—On Monday, October 12, three individuals were caught on camera stealing and damaging conservative signs off of private property because they, “hate government.”

A home owner who was suspicious of the theft from his front yard caught three people on camera (two who have been identified) taking signs out of his yard and slicing one with a knife. The owner of the home would like to stay anonymous after seeing the retaliation against St. Louis couple, Mark and Patricia McCloskey who used their second amendment right to protect their home during a protest and were chastised by the media and later indicted by a grand jury.

The Fairfield resident put up signs before the incident and they were getting damaged so when new signs were put up, the homeowner was prepared and had surveillance installed to capture any damage to the new signs. The signs supported the re-election of President Donald Trump, and Republican candidate for California’s Third Congressional District, Tamika Hamilton. They read, “Trump,” “TamikaGHamilton CA3” and “No New Taxes.”

Camera footage caught two 15-year-old males and another individual who has yet to be identified. When the two teens were caught by the homeowner, authorities arrived on the scene to chastise the teens for their behavior. The homeowner did not press charges against the two individuals, but asked “Why are you doing this?” They responded, “because we hate government.”

He did not have them arrested because he believed speaking to them about their rights would be more beneficial than placing them in handcuffs. He told them, “if you don’t like something, you can get involved in city council and express yourself.”

He was not sure if they understood what he meant, but he hopes that they they do. He told Canyon News, “You still have to stand up for what is right” after he said he wanted to “set an example for his own family.”

The two teens were taken home in a police cruiser to their parents.