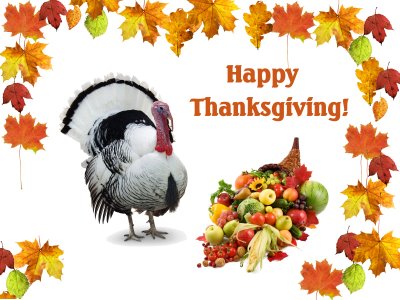 HOLLYWOOD—This Thursday we sit down to a sumptuous, gas-inducing, belly-swelling feast and stuff ourselves silly on turkey and cranberry sauce at home sweet home, and indulge in shameless gluttony until we have to call Johnson’s tow truck service to get up from the table.

Thanksgiving is a uniquely American tradition. I cannot think of another country that has institutionalized a day for gratitude, except for Canada. But they decided to do it on another day—the second Monday of October—so that doesn’t really count. This holiday, celebrating the earth’s bounty and people in funny buckled hats who claimed this land, gives me occasion to summon to mind a few things to be grateful for.

Be grateful for April Fool’s Day when we get to pull somebody’s leg. This is a lot of fun unless they have a prosthetic limb, and it falls off, leaving an unsightly stump.

Be grateful for little things. Like living in peace and turning a faucet and seeing a fresh stream of liquid come burbling out. Unfortunately it’s yellow and we’re all afraid to drink it.

Be grateful for egg on your face. It means never having to go without breakfast.

My little girl said, “Be grateful for the Pilgrims and Indians. We wouldn’t be here if it wasn’t for them.” (She doesn’t know what happened after the first peaceable Thanksgiving sit-down. But I figure why spoil a nice moment.)

“Be thankful you at least have a job,” people say. But that’s not what they mean. I think they mean, “I hate what I do, and I don’t like to get up in the morning.” But seriously, be grateful for your job—you’ll always have something to complain about.

Be grateful for chronic heartburn. You’ve lived so long with the ghastly symptoms that mimic a heart attack, when the “big one” finally comes, you’ll go supernova before you know what hit you.

Be grateful for the invention of soap, and grateful that nobody smells their own stinky feet.

Be grateful for morons. They give us something to snicker at. Like the spacey girl from Northern California who stopped in Simi Valley, rented an apartment and got a temp-agency job because she thought it was Hollywood.

Be grateful that you’re in a car that starts this morning. It’s the little things. If that car didn’t start, you might be late to the next address and get fired by the repo agency.

Be grateful for an entertaining game that Hasbro can’t hold a candle to: Where Did I Leave My Car? You darn well better know what day of the week it is and where you left it. The stakes are specially high if you park on an avenue where the parking opens into extra traffic lanes for rush hour. Wait? What time is it? Oops!  I need to sprint outside before I’m towed.

Be grateful there are three Jerry’s Famous Deli restaurants in greater Los Angeles and only one Angelina Jolie, or we’d all be foster children and forced to eat high-sodium Ramen and lousy canned vegetable beef soup people donated for Thanksgiving.

Be grateful for armadillos so you can shake your head and say, “I wonder what God was thinking.”

Even on Thanksgiving, gratitude does reach a limit. Who the devil invented a TV remote? I need that doggone thing to work the flat-screen, and it’s time for the Palmetto Bowl and South Plainfield versus North Plainfield game. Just when these perennial rivals battle it out over compass directions, nobody can find the darn remote. Well, I’m sure the Tandy Corp. is grateful when throngs of people come in for the universal replacement remote.

The ”˜universal’ may be tad pretentious. But, even so, I say this, if you can’t be grateful about something, at least be thankful.